Ray is a city dog as I’ve said before but he certainly enjoys the country life.

We spent the weekend up at Stephanie’s house minding her animals. She has 2 horses, 2 donkeys, 4 cats and 2 dogs.

Obviously I do most of the care but Ray is a very active partner.He feels a certain responsibility for all his cousins and keeping the grounds safe from robbers and varmints.

Here he is guarding the door

Here he is keeping watch outside. 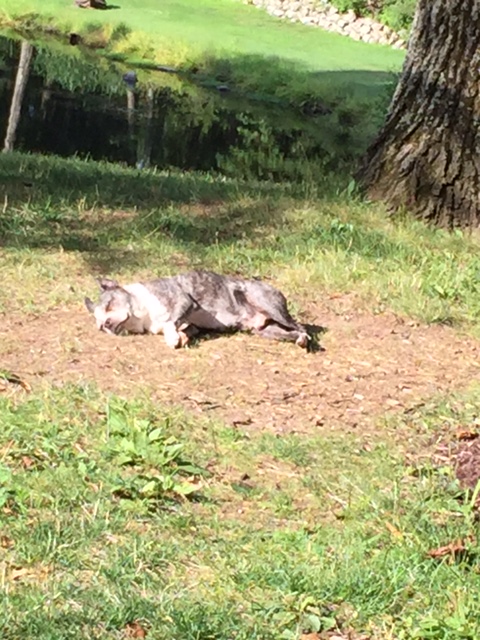 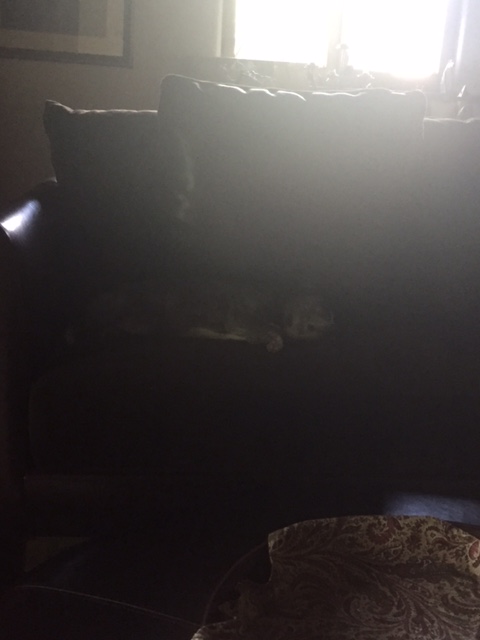 Here he is having a frisky romp with his cousin Lucy 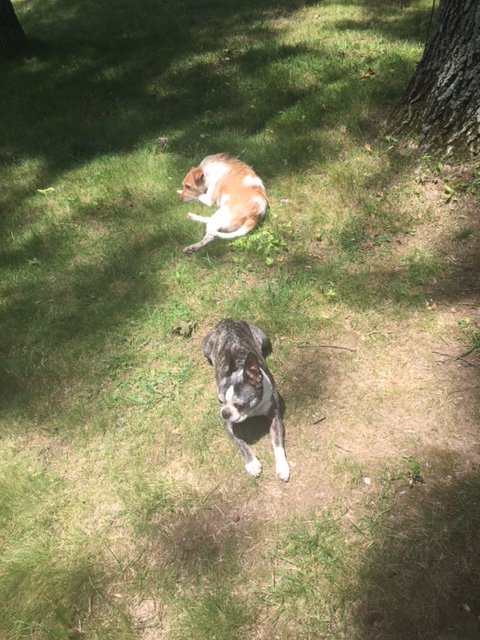 Of course he knows how to use the city to his benefit even more .

Why just this morning I was walking him while engrossed in my book “The Children” by Ann Leary and as I got to the end of the page I looked down at Ray because I’m a wonderful dog mother and I noticed that he was licking vomit.

I wasn’t that upset though because I spotted the cut up fruit so it was clearly a cocktail of some kind.

I’m sure the alcohol killed anything bad in it, right?

Since early in my writing of this blog I’ve amused you with stories about my friendship with David.

I’ve told you that he’s a right wing gun loving racist republican who if he wasn’t engaged to my good friend Liz and living across the hall I’d never have met and certainly not chosen as a friend.

It turned out that he was a very good friend to me. In fact he was a major source of comfort to me in one of the worst periods of my life.

The fact that our friendship still exists now that he is no longer with Liz and has moved to Houston Texas is one of those things that just can’t be explained.

I’ve had a lot of laughs with him though.

I was in Home Depot the other day and there was another woman there waiting with me to be served.

I mentioned the heat, you know just to be pleasant, and the woman agreed with me. Then she got chatty.

“Yeah and I had to walk about 12 blocks to get here and I have bronchitis. Don’t worry you can’t catch it. I haven’t been able to get to the gym for two weeks and dontcha know it I lost 4 fuckin’ pounds.”

I started to laugh because it brought to mind that I had once told David that I was walking Liz’s dog Rupert in the carriage and a well dressed woman came up to me and said “He is so fucking cute”.

“You only hear language like that in the Armed Forces, prisons or on the streets of New York”

When the Home Depot woman saw me laughing she was puzzled.

“Where are you from?”

“I live in the neighborhood”  I clearly didn’t get her meaning so she clarified this.

Now back to my friendship with David.

Even though he’s claimed that his hatred of the man has nothing to do with his race, as all racists do, I’ve long ago refused to let him speak to me about President Obama.

As far as donald trump, I never thought he was anything to worry about but that appears not to be true.

As you might know if you’ve read this blog for any amount of time, I am a serious follower of all things Bravo. I’ve always felt a kinship with those that feel the same way until…..

The other night I was watching “Watch What Happens Live” when Andy Cohen asked people to call in and vote for either Hillary or donald.

Much to my shock it was a landslide for donald.

This reinforced my fears. I know that if this man beats Hillary the United States is doomed.

I told David that if he votes for trump I could never forgive him and I couldn’t be his friend.

He swears he won’t.

The other day he actually said that he blames President Obama for the racial unrest in this country.

If he’s that stupid can I trust that he’ll keep his promise?

BTW I’m very aware that some of you will want to drop me as a blog friend because you don’t agree with what I said.

I can live with that.

So I’m walking Ray this morning. I read my book while I walk because as anyone knows, walking a dog is boring.

I casually glance down at Ray and I notice he’s not in his halter. I’m walking an empty leash.

I look around and he’s where I last saw him, licking something on the ground.

I always let him lick the ground outside the steak restaurant.

I run back and put on his halter.

I notice a big construction worker standing there laughing.

“Very funny. Why didn’t you say something?”

“I figured you’d realize sooner or later when you saw how light your leash was.”

“Glad you got a few yucks.” I walked away with as much dignity as I could muster.

I’m not feeling that good about myself now anyway.

Lizzie is the greatest friend.  She does a million things for me.

She lets my family stay in her apartment when they visit.

I only had to mention that I wanted to start painting again and she sent me a bunch of paints.

That’s just an example. Like I said she’s a great friend.

I, on the other hand, suck as a friend.

The only thing she asks of me is to pick up her mail and water her plants while she is in Santa Fe and she only has 2 plants.

I’ve been busy as a bee.

I may have made a new friend named Liz Caro. I’m saying her last name so you will know it’s not my regular Lizzie. I think I also like her husband Joe.

I like her because she’s outrageous and laughs at the same things I do and I like him because he’s kind of mean and I figure he’ll appreciate someone liking him anyway.

And here’s the good part. They live in another land so I can be friends with them without leaving my apartment.

I spent a night at my niece Stephanie’s house in Connecticut. I usually get a great dinner when I go there. My nephew Terry pulls out all the stops in a restaurant. Apps and dessert? No problem. Cocktails, his pleasure.

Unfortunately this was their bowling night so dinner was a big disappointment.

Not that I’m complaining (I actually am) because the evening was worth it. Although why  a blue collar sport should mean a blue collar dinner I can’t guess.

Now let me tell why I was interested in going to watch them bowl.

I’ve been hearing about Steph’s bowling for years. She actually gave herself a bowling name, Midge, and when she first joined a league years ago she had a bowling shirt made with “Midge” on the pocket. She also had a crystal (plastic) bowling ball with a rose in it.

She took it seriously. All her life  she’s been competitive.

I believe she named herself captain of the team and once punched one of the members in the stomach for not practicing enough .

Like I said, competitive and maybe a little free with her hands.

Eventually there was a mutiny where even her husband Terry voted her out as leader.

The rose bowling ball is gone but the name Midge remains.

I was totally looking forward to watching my little girl wipe up the floor with the other team.

Imagine my surprise to find that she stinks at bowling. In fact except for Terry her whole team stinks.

I may be being too harsh though. It’s possible that they only stink in comparison to the team they were playing.

These people were pros. You could tell before they threw a ball, and may I say that they each had about 5 balls, they were big time.

They had all kinds of leather things made to fit different parts of their arms and fingers. Plus they were wily.

Where our team (I considered myself part of the team even though I never left my seat) had to buy candy from a machine to keep up our energy, they came with a plastic box filled with candy. Plus they even had a little jar of powdered chalk to keep their fingers … I don’t know what it kept their fingers but it made us look like losers.

And once the game started they were a symphony to watch.

There was a girl named Anna who stood in front of the lane tapped her foot behind her and threw the ball, immediately turning without looking to see where it went because she always knocked down all the pins.

On the few times that one remained standing, also without looking she’d go to get her second ball because she knew the sound of a bowling ball hitting one too few pins like she knew the face of her first born.

If only she could have transferred all those bowling skills into a few teeth she’d have had it made.

After her turn she walked back to her team in kind of a slow motion ballet step with no expression on her face.

This was unlike our team where when someone got a strike or a spare there would be whoops and high fives or advice of “Focus!”or something equally stupid if something was missed.

Our team left in fairly good spirits since I believe that they won one of the games due to the handicap of one million that the other team had .

In fact they could barely enjoy their crap dinner what with patting themselves on the back for a game well played.

The next day was beautiful and I was happy to see Ray run around so he would sleep in the car.

There was no way he could keep up with his cousin Theo who was constantly searching for trespassing rodents under his barn. 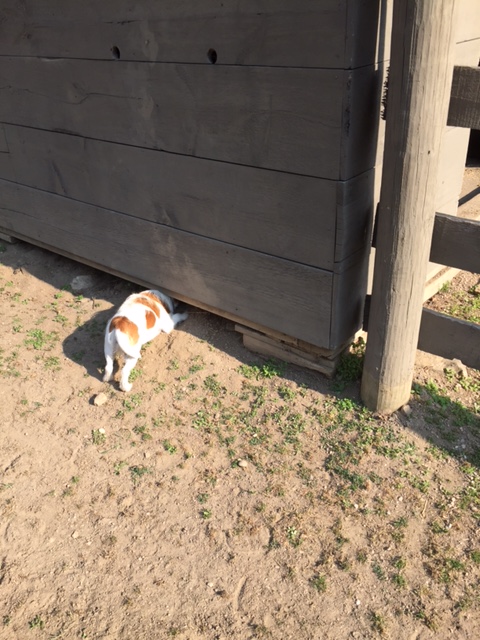 They say imitation is the finest form of flattery though and Ray did his best to imitate Theo in the car on the way  home. 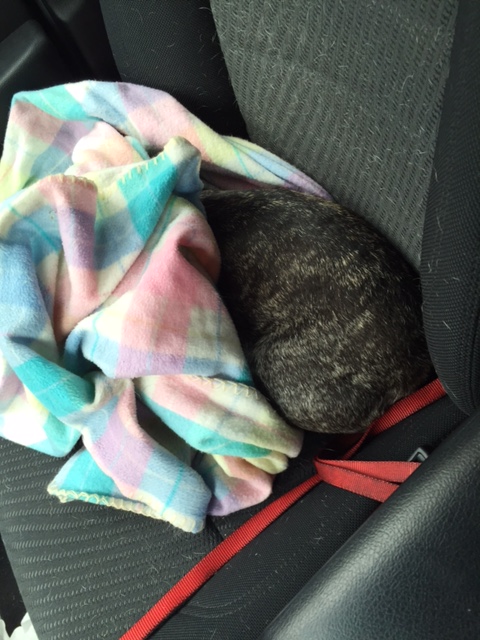