Why? Because only then will you get the magnitude of having 2 stinky meals when you’re away overnight.

Julie had to go to Southhampton to do some research on her new book. I decided to  accompany her so that I could check on my Montauk house.

I decided to leave Ray with my nephew Scott  since it was only for one night and he doesn’t love car rides.

You remember Scott. He’s the one who threw Ray off the chair only missing cracking his skull open by a hair.

I didn’t worry because I was sure that the stern look I gave him would put Scott on his best behavior and I was right.

As soon as he got to my house he texted me proof of life. 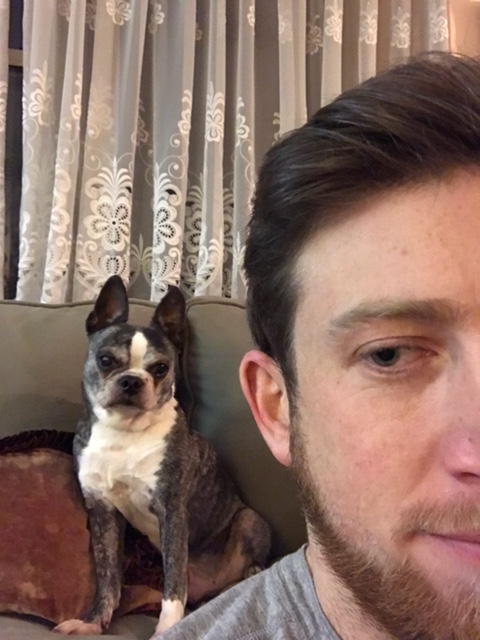 “Why is he sitting on the couch alone?” I asked and he followed that unacceptable foto up with: 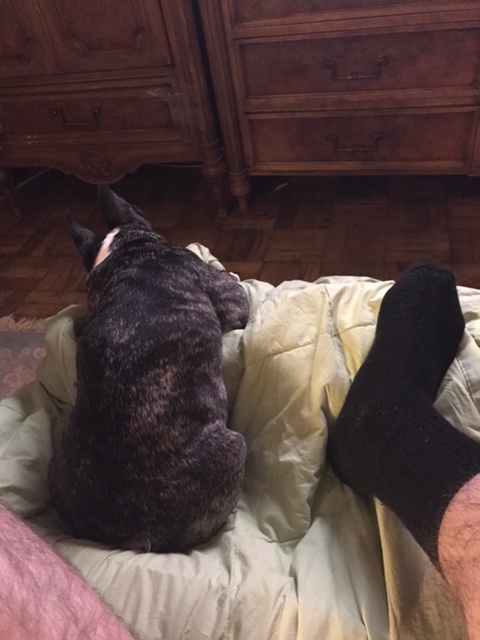 I was able to relax. I guess this was because I didn’t know the horror that was to befall me.

The long car ride gave Julie and me much needed time to go over world and family events and discuss them until they were solved.

We arrived at the library in Southhampton and Julie went in to do her research. When she finished it was about 2 p.m.so we decided to eat lunch in that tony town.

We chose what looked like a popular place. It was jammed with well dressed people not an original nose or a facial expression amongst them.

Julie and I each had one of their fancy sandwiches (you know with avocado and sprigs of green jammed in) and I had a small soup.

I DIDN’T EVEN EAT MY WHOLE SANDWICH BECAUSE IT STUNK SO MUCH. Julie was trying to keep a brave face while gagging down her lunch but I know the girl and I saw right through that.

We couldn’t get out of there fast enough.

There wasn’t much open in Montauk, this being out of season, just one fancy restaurant that demanded reservations and one plain seafood place that demanded that you wear a shirt.

After our unfortunate lunch it was a no brainer.

The atmosphere in the fancy restaurant was lovely but that’s where it ended.

Now I could go into detail about how my cosmopolitan was undrinkable (I believe it was made with moonshine) and my pasta was mushy and had so much garlic in it that it was not to be eaten by a human with tastebuds.

Julie had a burger which she told me was only okay.

Here is a side note:

My friend Susan, who also has a house in Montauk considers this one of her go to restaurants. When I told her about my meal she made 3 follow up phone calls to me with questions about what I found wanting and why I chose to order what I did when surely I should have known that they have much better dishes.

I’ve always said that Susan gets madder if I don’t like a restaurant that she likes than if I call her daughters whores. (Her daughters by the way are lovely and most proper)

Anyway back to me and Julie.

We went back to the house feeling more than a little let down.

Julie and I slept in the same bed and may I recommend her to anyone who’d like to share  a bed with her.

She lies down on her back and doesn’t move. She sleeps like a salami.

She did make a few cutting remarks about my bite plate and sleeping machine but I put that down to hunger pains.

I do want to say that there was light at the end of the tunnel. I always prefer ending on a high note.

Our breakfast at John’s Pancake House  wonderful. In fact it pleased me so that I was more than willing to pose for this playful photo. 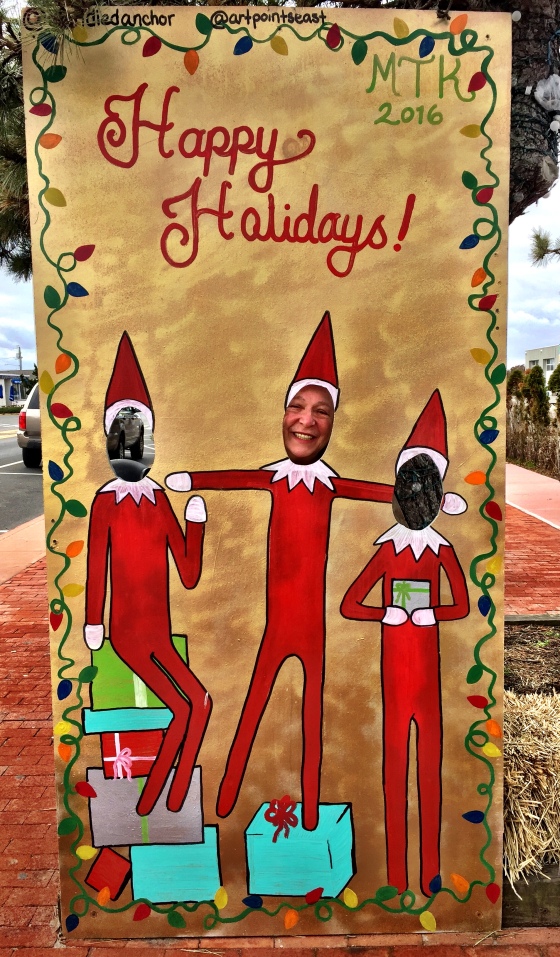 I spent the night at Stephanie’s again but this time she was home and she made a wonderful dinner and we played games.

Her darling husband Terry was there.

Stephanie always says that when I get feeble she’s going to take care of me. I am counting on Terry to protect me from her.

Also present my sweet niece and Steph’s baby sister, Laura and Laura’s son Scott.I could go on and on about how much Laura loves her boy but they say a picture is worth a thousand words. 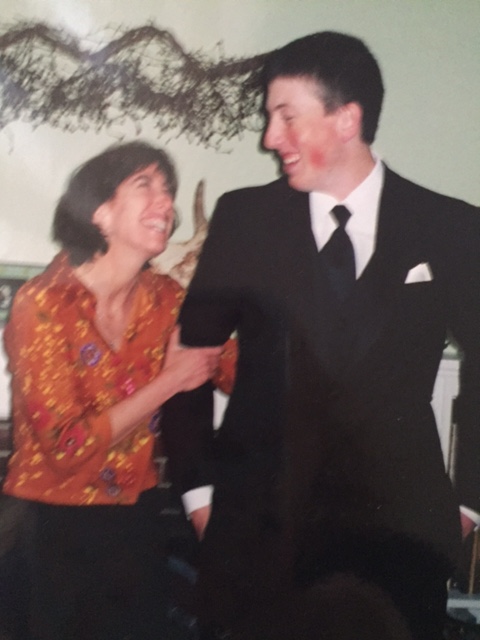 He’s much older now but she still looks at him the same way.

Scott minds Ray for me whenever I go away.He stays at my apartment because as you know I don’t want Ray upset in any way.

I’m going away for one night next week with Julie and Scott has “kindly” agreed to care for  my boy.

First of all I’ve tried to ignore the fact that I’ve heard Scott and Stephanie refer to Ray as “not all there” but something happened last night that made me think I may be too forgiving.

We were sitting down to dinner and Ray took his usual spot at the table. 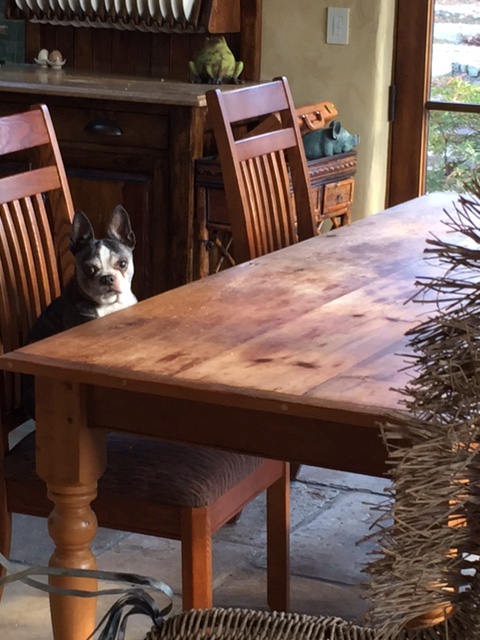 Since Ray was already seated and there were only 5 chairs I asked Scott if just this once he’d mind eating standing up.

Well you can imagine my shock when without a howdy do he just walked over to Ray’s chair and tipped it so Ray went flying.

Not wanting to ruin the tone of the evening I said nothing. I did give him quite an angry glare though so he’d know that I was displeased.

I’m thinking that if he treats my dog like this IN FRONT OF ME who knows what goes on when Scott is left to his own devices.

I think I’m going to buy a few of those penguins with cameras in them and leave them around next week just to keep an eye out.

In spite of that a good time was had by all.

The next morning Steph and I went shopping and while we were driving I happened to mention the meatballs and spaghetti that I had waiting for her and Terry when they came back from their last trip. Maybe I was waiting for  some compliments since my meatballs are stellar.

“My meatballs have been called stellar” I gave her a little nudge.

“Well they gave me diarrhea”

That made me hot under the collar.

“Something else made you sick. Terry and I were fine.”

“I have some of them leftover in the freezer. If I get diarrhea again you can shove your meatballs up your ass.”

I am still trying to remember if I ever spoke to my Aunt Ray like that.

I live 4 blocks from trump Tower.

Every time that fat schmuck goes anywhere the traffic is held up and a million cars with flashing red lights go flying past my house. They even have an ambulance in case he gets a burger stuck in his throat.

I wear my Hillary tees quite a bit so whenever this parade goes and I’m walking Ray I open my shirt so that he can note my disapproval .

I did have  a nice weekend though. I went up to Steph’s house to mind her animals. She has

I have to give the horses and donkeys lunch and dinner.

At lunch time I bring a big bunch of hay out to them and put it in specific spots for them to dine. The horses have no respect for me and they push me around.

One of them, I won’t mention any names, 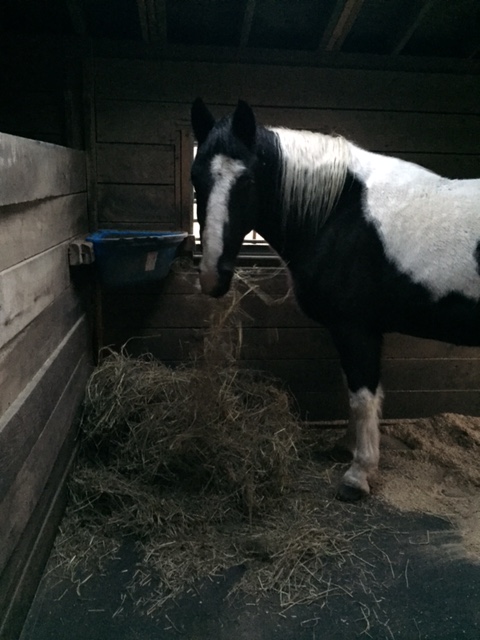 started eating the hay while it was in my arms thereby ignoring my “Down Boy!” instructions.

The donkeys were pretty well behaved but  when I wanted to take a picture WITH one  of them he made it pretty clear that he was a solo act. 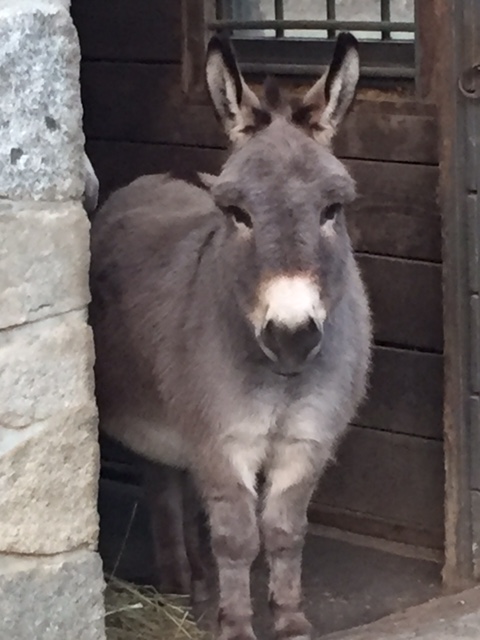 The only one that was appreciative was the barn cat who greeted me warmly each time I went down to give them all dinner. 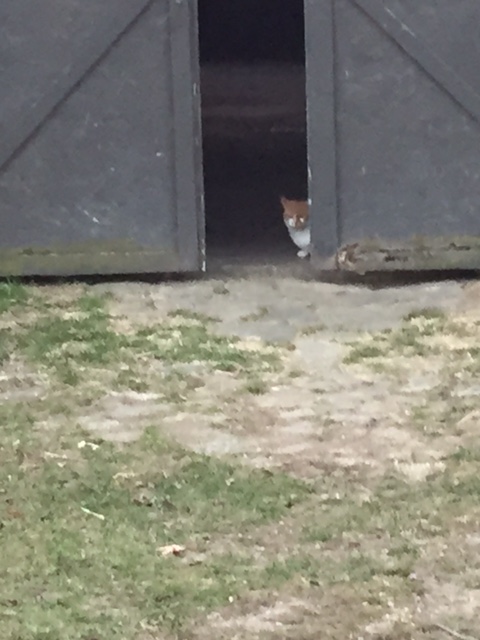 Ray, on the other hand thought all these guys were well, animals.

He expected his lunch to be served properly

Oh there is one more thing. Having a blog is a big burden because you have to be truthful even if it mars you for life. So here goes…

I had  the beginnings of a sex dream with donald trump.

Luckily I woke up screaming before we “did it” but I’m still going to hell anyway.

I’ve always said I’d never marry again but as those of you who follow me on Facebook know, I’ve made some exceptions: President Obama, Jon Bon Jovi and others.

I was at physical therapy yesterday and I happened to mention this to Ricky my torturer. 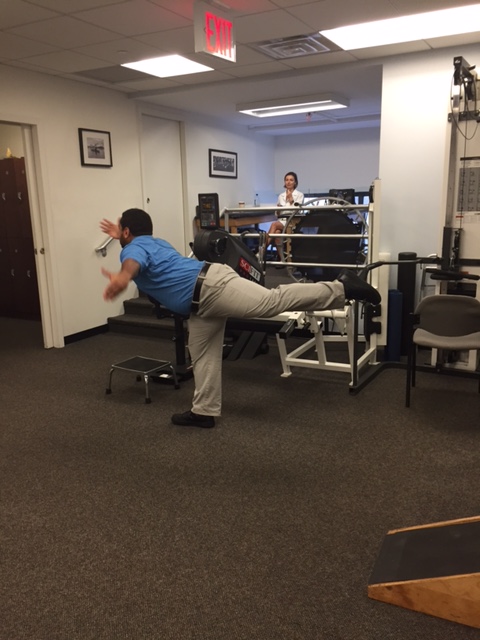 I’m really hoping that he’s showing someone an exercise in this picture.

Anyway I’m naming some of my lucky grooms Lebron James, any member of The Band…

To keep it from gong on forever I say, because I’m older and I see this as a teaching moment,

“You young punk I’d like to punch your lights out. The name of the group is “The Band” They backed Bob Dylan and you know… “The Last Waltz?”

” How would I know that? If I asked you if you knew who Souja Boy was, You wouldn’t know that.

“I absolutely do because I live in this world and (a little quieter) I watch TMZ every night.

From the next torture table a guy pipes up.

“If you ask me about “Soldier Boy” I know what I’d answer and he starts to sing the Shirrelles’ song.

Naturally I join in.