Although I never expected it I started hearing from the musicians. They either called or emailed me telling me that they were shocked and were available for anything I needed.

Then a terrible thing happened. Alan Rubin, Mr Fabulous in more ways than one way, died.

How do I describe Alan. He was simply outrageous. He said things that made everyone cringe and laugh.  He was a great trumpet player and one of the funniest guys I ever met.

I knew he had cancer and though he seemed to be beating it in the end that wasn’t the case.

I sent an email to his wife asking if it would be alright for me to visit. I thought I could give her a break and he and I always liked each other. I planned to walk into his room and say “You think YOU have problems?”

To my deep sadness he died the next morning.

The family was sitting Shiva in his sister’s house on Park Avenue. It never occurred to me not to go but I was a little nervous seeing everyone. By now they had all heard that I had been dumped.

I asked my friend Ronnie to meet me in the lobby of the building so I wouldn’t have to walk in alone.

We went in and I looked around. Practically every musician I had worked with and socialized with was in that room.

If it had been any other occasion it would have been a great hang. Even here, there were no sad faces. Everyone was telling Alan stories.

Alan’s wife Mary said that when he heard that dave had left me he said “Why?” and one of the guys said maybe he wanted to have fun before he gets too old. Alan said “Who could he have more fun with than Mattie?”  See why I loved him?

I walked over to several long time friends. They hugged me, looked at me with sad eyes and immediately turned away. I understood. It was uncomfortable to be around me.

It brought another truth home to me. I lost more than a husband. I was no longer a member of this group. I was an outsider and didn’t belong any more.

There were only 2 people who treated me exactly the same as always, Kenny Ascher, a magnificent musician and a long time friend and Lew Soloff.

Lew Soloff is one of the best and most famous trumpet players in the world.  He used to play with Blood Sweat and Tears and every major star that ever performed or recorded. He was in practically every band dave ever had. He’s called me several times to tell me how stupid my husband was. You can never hear enough of that.

In spite of the knowledge that dave was in love paradise and the music business was probably no longer in my future, I felt more in touch with the world than I had in years. If only it weren’t for the dreams. 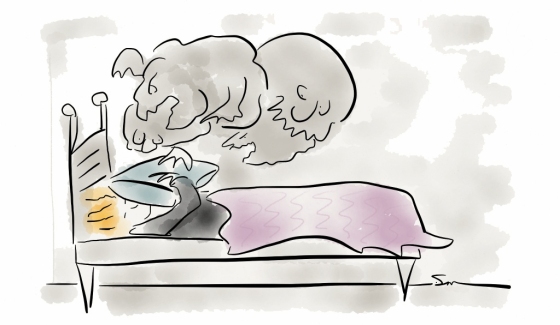 The days were fine but the dreams were terrifying. They were dreams of abandonment and fear. Sometimes I dreamt of my two dead sisters or my parents. Often it was dave walking away from me in one guise or another

When I got into bed at night it was a mixture of emotions. First I stretched out and felt totally happy that there was no one I had to cater to but as it got closer to dave’s return date, on the edge of that happiness was dread that the dreams would come.

I finally sent him a text saying that I would appreciate him letting me know what day he was coming home.

He didn’t answer for a few days. My friend, Susan, said that maybe that sounded like I wanted him to come back to me. I clarified it by sending another email

As you understand it will be uncomfortable for me when you come back. I know that you need to gather your music for the tour and get your visa and visas for the band ( a job that I usually did)

I would really like to know in advance when you are coming.

I plan to be in new york from July 10 to July 20. It might take a while to get all of my stuff out of the apartment.

Are you planning on staying here when you come back on July 10?

When you say you are packing all your stuff do you mean just for the tour or to leave forever?

I thought it would be uncomfortable to you if I stayed there but I have spent a fortune and a hotel is very expensive. I’m trying to find a room for the week.

I had hoped we could be friends. I still hope so but it’s up to you.

…I need a new computer. Any way could you call Debra and have Ron (our computer guy) get me a new one and transfer all data from my tower or should I?

From me to him:

You can stay here.

I made the den into a guest room. We have been together for 45 years. We can stay under one roof.

There is a lot of business we have to take care of.

I don’t want to make you uncomfortable.

“A Stranger With the Face of My Best Friend”.

I had determined that I was going to stay in the apartment for the whole time that girl was in nyc. The thought of him bringing her into my home made me want to throw up. He promised he wouldn’t but I didn’t know him any more.

The first day he didn’t call and he didn’t come over. Then I got a call from Jim, the guy who is the librarian for dave’s music.

He asked if he could pick up the music and bring it over to his office to work on it.

I was relieved because that meant that it would cut down the time that dave would need to be in the apartment.

Jim arrived and  put his arms around me. He said “The guy’s a fucking asshole”

I put the passports and the visa forms and dave’s bank checks and personal amex card in with the music.  At my suggestion he had applied for these things so he could pay for his slut with cards and money other than our joint accounts.

I sent dave a text saying I was doing this.

One thought on “6. Dear Alan Rubin”