When my sister read what I wrote yesterday she said “We are so close I can’t believe you went through that and didn’t tell me.”

She really understood though. This situation was an embarrassment to my mother and to me and silence was the way we dealt with it.

My sisters and I were raised not to be any trouble.

When visiting people the only answer my mother found acceptable to “Would you like a drink or something?” was “No, thank you”.

Marcia asked me how life continued after this. Did it change?

I think it didn’t change but then I did remember one thing.

I’ve always loved dogs. I’d had 2 at different times of my childhood but neither of them lived very long.

When this happened I told my parents  I was getting a dog.

My mother was always against it. Dogs were messy and I worked and part of the care would be on her.

I know this sounds strange to all of you that I would need their permission because I was in my early 20’s but I was still living at home then.

In my head I saw a doberman or a shepherd.

I went to Macy’s pet department  where I found Norman. He was a thin basset hound who was a close out., reduced from $140 to $89.

He was older than the other puppies and when they let him out of the cage he kept walking around and resting his head on the soft dog beds. Maybe not much for security but I didn’t think about that. The minute I saw him I knew we were meant for each other. I rarely went anywhere alone again. 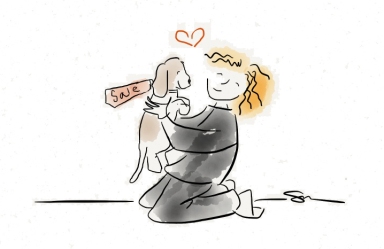 There were  so many replies to yesterday’s blog entry, mostly from women. The comments were so personal that I’m thinking that my story isn’t that unique.

I was so touched by what I heard  from strangers and from my friends and family who knew nothing about this.

Marcia asked if I felt any different for having told my story. I thought not. I didn’t feel freer or anything but I’ve never been that much in touch with my feelings.

I did keep remembering things. One of which was that when the police asked if I had been raped, I did say no.

They all knew it wasn’t true but I could see my parents were glad I said that.

Here’s something else. Even after writing all this I still can’t say the word. I can write it but I can’t say it.

Even though I hadn’t thought about it in many years it has affected my whole life, often without my realizing it.

When Julie first moved out of her parents house I begged her and my sister to have her move into a doorman building. They thought I was being overly cautious and they chose a brownstone.

Any of you who have followed Julie’s writing know that for a period of time she and her family moved into an apartment house with no doorman in a drug infested neighborhood.

Every time I visited her I thought I would pass out whenever I got into the elevator. I lived in dread that the elevator would stop and someone would get in with me.

Funnily I never associated it with my experience. I thought it was just good common sense.

To everyone who says I’m brave, I’m not brave enough to write about this any more so that’s pretty much all I have to say on the topic.

Now on to preparing for my sleep center experience.