On my way home from Stephanie’s yesterday I did get stopped for speeding. Did you hear that Julie? Steph?

They’re always saying that I drive so slowly that if I ever hit someone with my car I’d just shove them down the block. Well you don’t get stopped for driving too slowly. Well maybe you do but I didn’t.

The officer was a sweet pretty woman who asked me why I was in Newtown since I my car was from NYC. I told her I was visiting my niece. She asked where she lived and I told her that.   I was trying to figure out a way to mention that my husband left me after 36 years of marriage, a sure fire get out of jail free card when she asked for my license and registration and went back to her car. She came back a little while later and said she only gave me a warning. Maybe all that flinging myself around and banging on my steering wheel while she was gone crying “Why me?” was unnecessary. 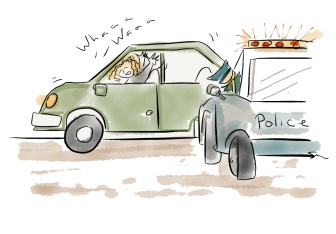 Wait, did I say nothing much happened yesterday? I forgot that I was this close (-) to saving David’s life yesterday.

I was leaving my apartment at around 9 am when I noticed his newspapers still outside his door. That never happens. I looked at them for a minute and thought about ringing his bell but then good sense took over me. What if he was still sleeping? He’d really be mad if I woke him up and he never likes to see me in the morning.

I stepped on the elevator and texted him ” r u ok?”

The elevator reached the lobby and I was just about to step out and start my day when I said to myself “What if I leave and he is injured or sick? Liz would be so mad at me” so I went back up. When I got back to my floor I looked out and his newspapers were gone. He obviously wasn’t dead.

I got proof of that later when he texted me back “What the fuck are you talking about?”

Boaters always tell harrowing stories about being caught in a fog. dave and I used to say that all fog stories are the same. If you’re there to tell it then the story is, first you were lost in the fog and then you weren’t.

So to all you new writers out there, if you can’t think of anything to say you can always pull “first David was dead and then he wasn’t or I almost got a ticket and then I didn’t ” out of your ass.

3 thoughts on “340. Ernest Hemingway could have learned a thing or two from me.”