My great nephew Jordan came to visit with a friend. I was really happy because he lives far away and I don’t get to spend time with him very often.

They were in New York City to go to a concert in Brooklyn.

When they were about to leave Jordan reminded his friend to bring his ear plugs.

Ear plugs? To a concert?

I was able to get an answer to my puzzlement the next morning.

They explained that the music is too loud for them to bear without the plugs.

“But it’s music. You are blocking out any subtlety in the sound. What’s the  point of hearing live music?”

Clearly I didn’t get it.

“Did anyone else bring ear plugs?”

“Oh sure, almost everyone.At least 50% of the people”

But I don’t want you readers to think I’m totally out of touch. I do realize that there is a difference between how I live in the world and how young people do it.

My sister and I are going to Italy in a few weeks. My nephew Scott used to stay here to mind Ray but since I heard him agree with Stephanie that Ray was not “all there” he is no longer my first choice.

As I might have mentioned I am very close to my Super and his wife Alba and they are both dog lovers.

Alba said her son and two nephews with her overseeing it will take turns staying in my apartment while I’m away.

I have spoken to all three boys and told them that as long as they are nice to my dog I don’t care if they have hookers here or run a meth lab.

Just to make sure I meant it one of them asked if hookers were okay.

I told him “It’s fine with me as long as while you’re doing whatever you’re doing with them at the same time you’re reaching down and petting my dog.

Remember when I told you that one of my nieces asked me what my calculator was and screamed with laughter when she realized it not only was an adding machine but it was plugged in?

Well it was for that reason that I bought a Mr. Coffee so that my dog sitters would be able to make coffee since I had a Farberware coffee pot and there is no way they’d know how to use it. 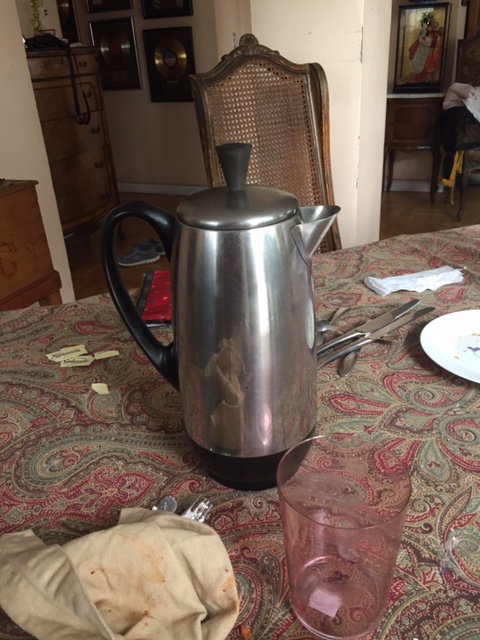 When I explained that to Jordan and his friend over breakfast they both looked at me blankly.

“You saw me pour coffee out of it. What did you think it was?”

Jordan; “I thought it was a pitcher to keep the coffee hot”

This went on and on. I won’t bore you with hows stupid they were and how out of touch I was.

But they are cute aren’t they?