So I tried to pick up the carpet. I removed about 1 square foot and  thought I blew a gut.

I finally went down and asked my super if he could get someone to pick it up for me. I said I’d give them $50. Then I got to thinking. That’s really not enough.

I went back downstairs and told him that I thought $100 would be fairer.

He said he’d do it with one of the doormen after work.

They came up and pulled up the carpet, pulled out the staples and nails, pulled away dave’s piano and giant computer and synthesizer desk, cleaned the floor, went though all the thousands of wires, many of which were connected to nothing, and removed some and organized those that were left.

They tied it up and took it all with them.

At the elevator I explained that I knew that this wasn’t enough money but I appreciated it more than I could say.

THEY BOTH REFUSED THE MONEY.

They said just a hug and a kiss on the cheek is the only payment they would accept. 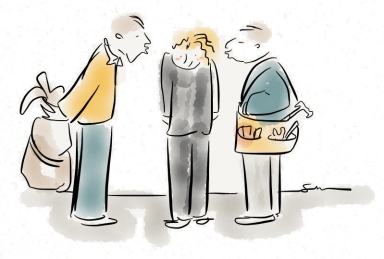 6 thoughts on “109. Do you think it’s tacky to use your tongue when you give your super a thank you kiss? I hope not.”