I finally finished getting my taxes ready for the accountant.

While I looked it over I noticed that one of my expenses was “money for dave and his slut”.

I was going to change it but why not call a craphead a craphead?

Since dave, always taking the high road, didn’t want to use our mutual money on his lowlife girlfriend, we sold a bond and split the money. Hence the slut depiction on the check memo.

I was still angry then. As you can see, now I’m over it.

Actually I realize that I don’t hate him. I would like to never see him again but I wish him well.

I always used to think women who were left by their husbands and blamed the other woman were stupid.

I realize now that logic has nothing to do with it.

She knew that he was in a long term marriage.

Most of the people she met while she was with him knew me for years yet that didn’t stop her.

Plus she sent those filthy letters to my home.

Still, she owed me nothing.

So why do I hate her and wish her ill but not  him?

I can interact with him. I am angry at him but I also feel pity and affection for him and I’m protective of him.

If he were sick or died I would grieve.

Yet he is the murderer of this marriage not her.

Maybe it’s as simple as he and I have a history.

Or maybe it’s what all those other women wanted to think when their men left them for another woman. That she lured him away and if she weren’t there he would have stayed. 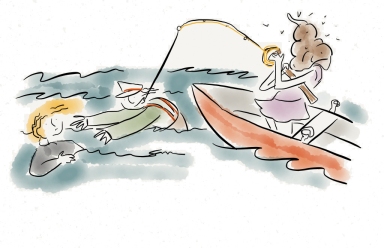