My first day of freedom wasn’t all that I thought it would be.

I was the only one in the movie theatre.

I was wondering if that meant that I march to my own drummer or that only a lame-o like me had nothing better to do on a sunny Saturday afternoon.

My fear that someone would sneak up on me and bop me on the head kept me from totally enjoying the flick. 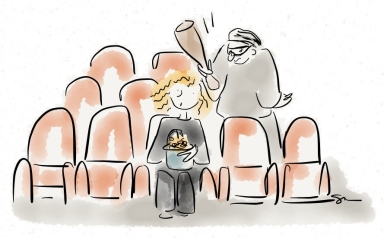 After the movie I made a few stops but I had nothing else to do until dinner with Julie and Violet at 6 so I went home.

During dinner Violet mentioned that a boy in her class named “Joey” asked that his nickname be “Jewie”. Taken aback I asked why he would pick that as a name and she answered with a look like “Duh!”,

All I could think of was that times have changed, If anyone called me Jewie when I was young it was never by my choice.

After dinner, it was 7: 30 or so, I was on the bus going home and I texted David to see if he still wanted to have a drink since he had sent his “Cocktails?” email to me while I was out. You see, the new me was a night owl. Hell I may even stay up until 9 or 10.

“Sure. Why not? Have had 2 Margaritas but I’m trying to get myself off this whole moderation thing!!”

We spent the rest of the evening on his terrace shootin’ the breeze.

When he isn’t rolling his eyes or screaming at me in German he can be quite the charming companion.

One thought on “207 Life sans Rupie or Freedom ain’t all it’s cracked up to be.”