In last month’s AARP Bulletin they cite the fact that though since 1990 divorces as a whole have gone down in the United States, it has doubled for those over 50.

That’s a shocking thing in itself and they give lots of reasons why, none of which I care about.

What I’m thinking is that it is much more difficult for someone who got married  40 years ago to be left then it is for someone young mainly because when we entered into marriage the expectations were different.

Young women today are expected to work and have their own identity. Remember I’m coming from a very middle class place but when I got married, though I was working, my job was not expected to do anything to support the family and when it got in the way of traveling with my husband, I quit.

I  just thought of something. I am one of 4 daughters. My father and my uncles had a thriving business. There was only one son in our family, my cousin Matthew, and he automatically went into the business as did some of my brothers in law.

Except for my sister, Iris, who acted as a secretary for a period of time while her husband was overseas in the Army (when he came out he joined the business), none of us were even considered .

And it wasn’t a business of tugging and lifting. They sold the cloth that covers mattresses, mattress ticking.

We were 4 really smart women, as were my cousins Maxine and Barbara but we were passed over like bad fish. Not even bad fish. That suggests a negative. We were ignored.

I know I’ve said this before but every bit of creativity I had went into helping my husband succeed. This wasn’t his fault. I was happy to do it and I felt truly fulfilled. I’ve always said that some of my happiest times were when dave and I were working on a project together with him writing, arranging and producing and me doing the business and writing the lyrics. 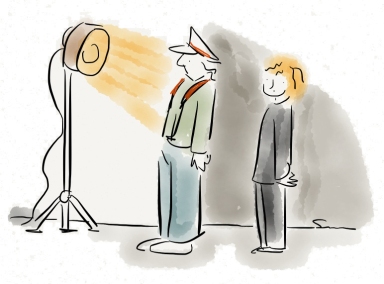 Though my parents loved me, I had no doubt about that, I wasn’t valued . When I’d play the songs I wrote for my mother, almost immediately she would lose interest and start talking. I still remember dave playing them his jingle reel and my mother listened as though it were Beethoven.  She actually had tears in her eyes.

The final proof that we were only as valuable as the men we married came when my father’s will was read.

They didn’t name her even though she was a stockbroker because her husband sold fork lifts and me because I was married to a musician who would later turn out to be a fuckwad (although they had no way of knowing this). Sorry, couldn’t resist.

This would never happen today. Women today marry later and have usually established their careers by the time they enter into that union so when they leave or are dumped they have something to fall back on.

If I were born later I’d have sold the cloth that covered the mattresses in my trundle bed that I bought at Sleepy’s and I could have gotten a bigger discount than $150.

5 thoughts on “208 If only Gloria Steinem was a little older I wouldn’t be in this fix.”