I woke up cranky today. I don’t know why.

Even having coffee with David and Liz didn’t cheer me up.

Getting David riled up is often my favorite part of the morning.

I like to bring up subjects that make him spit in rage.

Usually just praising Obamacare does the trick as it did today but I didn’t derive my usual pleasure at his anger.

I decided to go to second base as they say and quote Bill Maher. That’s my go-to inciter.

But when David did his rant about not peeing on Bill Maher if he was on fire it didn’t bring even the slightest  smile to my face and today he was more colorful than usual in stating that he himself would like to immolate Bill and watch him burn yet it still did  nada for my mood. Even when he stomped out of the room… nuthin’ 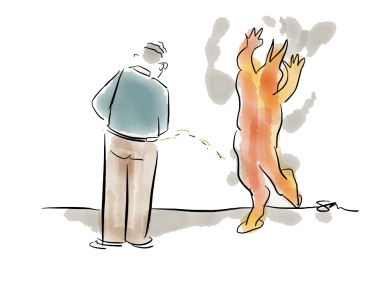 I am trying to think of something I like to do that I can do today but in the mood I’m in I won’t like doing it and I’ll probably ruin it.

I know one thing.  I’d better stay away from the few friends I have.

The sun must be over the yardarm somewhere. Unfortunately the “somewhere” is Japan where my fuckhead husband is sharing cocktails with his shithead girlfriend.

Man I can’t get a break.