Now you all know I’m not a complainer.

Accepting that fact, I keep reading stuff about American Airlines firing maintenance workers and outsourcing their jobs to people outside of the control of the FAA.

I don’t know if I’ve ever mentioned this before but for the most part I stopped flying for 25 years because I couldn’t stand beginning and ending my vacations in terror.

When I say “for the most part” I mean that if there was no other way to get there , I did fly. For example when calling a cab to take me to Japan didn’t seem possible I did dope myself up and fly. But I drove or took trains or boats everywhere else.

It turned out that this came to bite me in the ass because I probably would have toured with dave and he wouldn’t have been able to spend so much time with you know who.

Anyhoo (thank you Julie) I did start flying again after first my sister Phyllis and then my sister Iris died. I figured nothing could happen to me that would be worse than losing them.

Just because I fly don’t think for a minute that I enjoy it. But as I said I’m not a complainer.

So let’s not consider this complaining. I’d like to think of it as “thinking aloud”

My trip to Santa Fe is on American Airlines. I only chose it because that’s the airline that David is taking and I thought it would be more comforting to travel with him. Speaking about thinking I should have given that a little more thought.

At first I was upset that he was traveling first class while I had to squeeze myself into coach. For some odd reason I was sad that I wasn’t sitting with him.  Then he told me that when he sits next to nervous flyers he likes to say things like “What was that?” and “That doesn’t sound right” or “Do you smell something burning?”.  I realized then that the distance between First and Coach was barely enough. 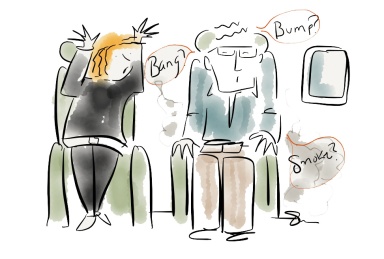 Now today I’m reading that the airlines are outsourcing to mechanics that aren’t real mechanics and there could be problems with a seat that won’t come back up or a hole in the engine only the first of which will be detected.

I feel so sorry for whoever is sitting next to me on that plane.