Well I believe I’ve been saved by my sister Marcia fasting for my soul yesterday. I start the year with a clean slate sin wise.

I was a little worried because late last night my newly fixed TV went black for a minute. I wondered if it was God’s way of saying you can’t send in a sub for Yom Kippur but my friend Susan said not to worry I’m okay. She speaks a lot of Jewish so I trust her.

Now that the holidays are over I am expected to take care of any business that has been put on the back burner.  It’s making me scared because I’ve gathered many of the facts and it’s almost time for me to make a decision that will affect me and dave for the rest of our lives.

I think I’ll need help with this. A money person.

I  feel that I’ve been writing too much about David. I do this mainly because he’s someone I deal with a lot and also he’s kind of a colorful person.

Liz who’s much smarter, nicer, prettier and funnier than David doesn’t get written about much because number one, she won’t let me  and 2. she’s got a 24/7 job of protecting me from David and that crowds out many of her bon mots.

Why just last night I got an email from David that put me in a state of panic. He said he may not be able to travel with me to Santa Fe because he could be away on business. He added some stuff about it being safer if we travel separately so at least one of us would reach our destination.

Liz was forced to yell at him because she said quite rightly that since the chances of his not traveling with me were remote there was no reason to worry me. (She knows me very well and has been present for many of my dithers). She reminded him of what he always says “What’s in it for me?”. He should have known full well that I would drive him crazy until the day of departure if he scared me.

Also, she continued, saying he’ll throw me a croissant is one thing but joking about the dangers of flying is not acceptable.

“I just won’t talk” he always threatens this but never does it.

“Oh Bunny” she comforts him “Just be more sensitive”.

That’s like asking a pig to wear high heels. 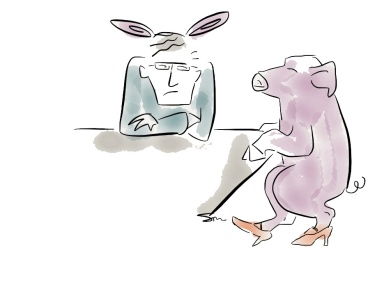 Leave a Reply to David (yes that David) Cancel reply