I’m sitting at my computer waiting for my alka selter to take effect.

You guessed it. Cocktails with David last night.

And even though I am trying very hard not to go out to eat because I simply can’t afford it any more I still suggested that we continue our very deep, thoughtful conversation at the new restaurant down the street.

I think we were talking about something I read on twitter.

Could you fall in love with a misogynist bigot if the person was hysterically funny?

Keep in mind, cocktail hour makes everything seem deep and thoughtful. Anyway I was determined to ask Liz what she thought about it since she must know.

I changed out of my pajamas and put on something black and off we went.

At the restaurant David mentioned that he was planning on going to shoot clay pigeons with his friend Ian.

You remember Ian. He’s the guy who got dressed to go out and checked to see that he had his glasses, wallet and switch blade.

(We had abandoned our previous conversation with a solution of “who cares?”)

When I heard about this outing I thought “Now that is something I’d like to try.” so I mentioned to David that I might like to accompany them.

Well you’d think that I suggested that I tag along on his wedding night.

“Absolutely not! I will never go shooting with a novice. It’s a good way to get yourself killed.” 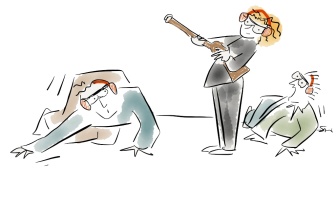 “Don’t be ridiculous. I won’t kill you and besides I’m not a novice. I once took riflery at camp Ma-ho-ge.”

He stopped dead in his tracks. By this time we were walking back home.

His voice got real high “You don’t even know the differenced between a rifle and a shotgun?”

Like there’s a big difference.  You aim and shoot. Anyway I decided to throw him a bone.

“You can show me. And don’t worry. I know enough not to aim a loaded gun at anyone. I’ve seen that on TV a million times so you’re safe. I won’t shoot you or even Ian”

“Tell that to the guy who went hunting with Dick Cheney”

He takes any opportunity to mention a republican but he couldn’t throw me off so easily.

“Pleeease David, pleeeeeze take me with you”

I’m going to tell Liz to make him take me then I’ll shoot him in the foot.

2 thoughts on “289. Sing this: Have gun will travel reads the card of a girl”