Yesterday was the annual Christmas party held in the lobby of my building.

I’ve lived here since 1976 and this is the first time I’ve gone to it.

There are a lot of people I like in the building. Many of whom I know well enough to kiss them hello but don’t have a clue as to their names and since the other day I couldn’t remember how to spell “Saturday”, there isn’t much point in my learning them now.

It was a pretty good party, delicious food and plenty of wine and nice people but I once again was reminded of the fact that I have absolutely no ability for small talk.

That’s why all of a sudden I spit out something weird . Ask my nieces Julie and Stephanie if that isn’t true.

Just yesterday I was on the Bridgeport ferry with Steph to pick up her new dog. More about that later.

There was a guy picking up the trash and he asked us if anyone was drinking the full coffee cup and almost full soda cup on a nearby table since there was no one around.

A woman told him that she’d seen a lady put them down awhile ago but she hasn’t been back. The man picked them up and put them in the trash bag.

I turned to the woman and said,

“Obviously they didn’t want them. Who’d just leave their drinks there for anyone to spit in….In fact I was just about to spit in them.” 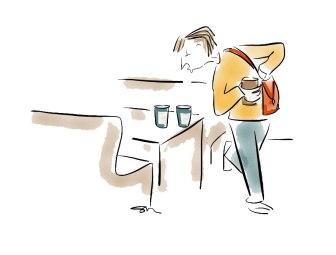 Stephanie just shook her head as the woman looked at me strangely.

Anyway back to the party.

I hung around and spoke to my friend Carol and a few others but for the most part I just waited for a reasonable  amount of time to pass so I could go home.

There was one highlight. A woman who has lived here for as long as I have told us that she was extremely upset because on the 21st the world was going to end. She had a real crazy look in her eyes.

“Are you talking about that Mayan calendar thing?”

That really pissed her off.

So in my smart calming voice I tried to comfort her even though I haven’t liked her since 1984 when I picked up a package for her in Montauk and she never thanked me, but I don’t hold grudges.

She started mumbling something about finding a fallout shelter but she didn’t know if it would help and she kept on mumbling as she wandered away.

That was pretty much the highlight of the party.

I said good night to my friends and probably said  something inappropriate to my super and went up to my apartment.

Oh and the puppy Steph got.

When we brought her home she just kept hiding under things so the other 2 dogs, a labrador retriever mix and a jack russell mix, couldn’t get near her.

This morning Steph called me and said that Lucy is sitting across from the other dogs with 3 chew sticks in front of her and any time one of the other dogs tries to get his chew stick back she growls at them. 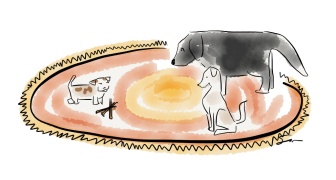 I think she may be over her nervousness.