Got your attention, huh?

I finally went to see my shrink about the nightmares and she changed my medication.

Not only have the bad dreams stopped for the most part but since I’ve started taking the new stuff I feel so much happier.

In fact miraculously I no longer want to wear my wedding ring. I put it away for good.  I’m still wearing my big gaudy engagement ring but that’s because I’m my mother’s daughter, not because I’m holding on to anything.

That takes care of the drugs.

The rock and roll is a stretch but I got some pretty good news from my co-writer, Terry Silverlight. Terry has written and had songs recorded by loads of famous people, one of which is Roberta Flack. I’m really lucky he writes with me.

Anyway Terry told me that he sent a bunch of our songs to a Nashville publishing company and they loved them.

Even though he assured me that probably nothing will come of it, I’ve been fine tuning my Grammy acceptance speech ever since.

Sex? Still nothing but it’s only the first day of 2013 and there are plenty of sailors in town for the holiday. 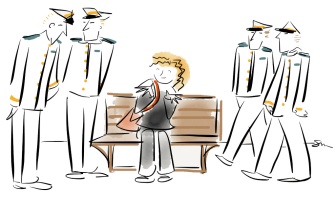