It’s unlikely but possible that show business may not be for me.

Just this morning an email to Julie brought to mind a great skill of mine.

My powers of persuasion.

I was reminded of a planned outing I had with her when she was about 9 years old, the age that her daughter Violet is now.

I was going to take her to lunch at “Mary’s Fancy” a restaurant that served excellent cheeseburgers and hot fudge sundaes. We would follow that up with a movie.

Just before I picked her up my mother told me that my Aunt Nina’s father, Mr. Augen, had finally died and I had to go to the funeral.

The reason I said “finally” was because I had been witness to one of Mr.Augen’s near death experiences not too long before that. It was at a family function at my cousin Matthew’s house.

Mr. Augen was choking on his teeth or something.

Everyone in the family just stood there frozen practically bidding him “adieu” when my cousin Barbara jumped up, reached into his mouth and pulled out his bridge thereby saving his life and ruining what was to be a carefree Sunday for Julie a few years later. 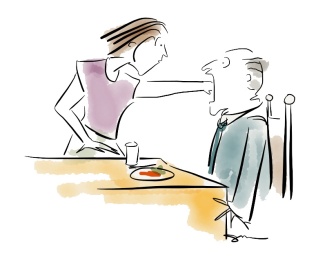 It wasn’t easy breaking the news of the death to Julie. She was actively looking forward to that hot fudge sundae and since my sister’s home was healthy city, the probability of her having M&M’s and soda at the movie theatre was an added incentive to spending the day with me.

I figured that it’s all in the telling. If I just said “Gotta cancel. Going to a funeral” she’d be heartbroken. I decided to hold out the fabulous carrot of taking her to the funeral with me.

Lunch would still be on the menu (get it? menu.) Of course she’d miss the movie but we’d get to spend some quality time together at the Riverside Funeral Home.

Since neither of us gave a good shit about Mr. Augen, who was just a shadowy figure in my life, and none in hers, we could enjoy the spectical without it bringing us down.

True I did a real tap dance (there it is again, my previous career choice) to convince her to come with me but it says a lot about what kind of kid she was that even though she was disappointed, she went along with it hoping there might be some yucks involved.

So whaddaya think folks? Politics or some kind of Ambassadorship?