I know I said I got a dog for Elvis and I did. But I got it for me too.

When I first brought Raymond home he , like his brother, Elvis, acted like butter wouldn’t melt in his mouth.

Let me tell you this, after living here for 3 days I’ve found out that it would. Another thing that would melt in his mouth is the parmesan cheese that was in my bag of groceries that I carelessly  left by the door.

It’s still usable though. I’ll put it out for cocktails and say that really good parmesan cheese frequently has what appears like (but isn’t) tooth marks.

Here’s another unbearable thing about Ray. HE ADORES DAVID.

This morning I was taking him out and he ran to David and Liz’ door and started crying. He only met them last night. What’s the big draw?

It’s not like David is even nice to him. He calls him Colonel Parker, not Raymond because he thinks it goes better with Elvis. How is this fair? Did David save him from the chair? Does David sleep sideways in his bed so Ray can stretch out? I think you all  know the answer to that. 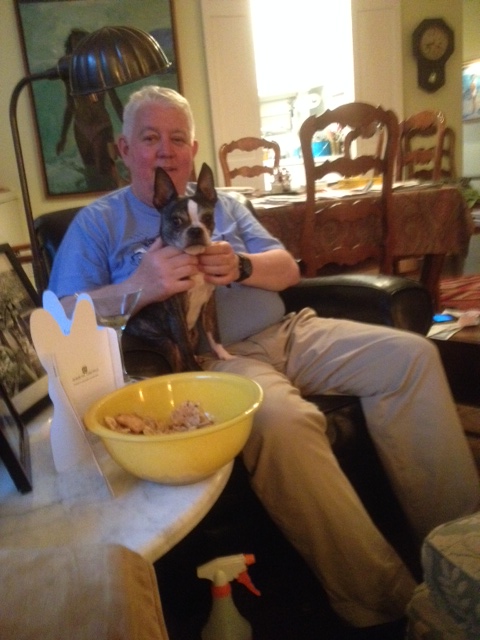 Speaking of Elvis, he’s sleep deprived because he has to make sure that Ray doesn’t touch any of his stuff. Sometimes I see him sitting up with his eyes closed.

Back to David and Ray. To add insult to injury, when David isn’t there Ray sits in his chair.