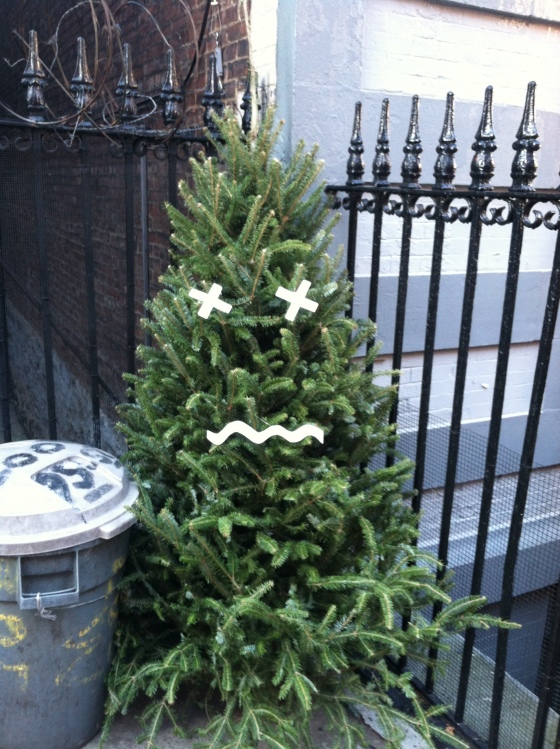 Julie and I are usually alone on Christmas. Her daughter is with her father and my ex husband is with his present wife. I’m hoping he gives her the same kind of Christmas that he’s always given me. Opening up your no presents in a deserted marina in some shit hole town in Florida.

NOTE : You people from Florida, don’t take offense. I have nothing against Florida except that it’s not New York and anyone that thinks you can throw some tinsel on a palm tree and make it holidayish, I got a bridge to sell you and it ain’t in Florida.

So to me, being with Julie on Christmas is not at all sad.

We love each other’s company and we try to make it festive.

The year before last we planned to go to a movie and have dinner at the place that Jews go to celebrate the birth of Christ which is a chinese restaurant. Our favorite is Chef Ho.

When we called the day before we were shocked to see that the movie was sold out and and the restaurant only had openings for 3:30 or 10:00 p.m.

We ended up at a mediocre kosher deli which was still pretty crowded with all the Jews that couldn’t get into Chef Ho.

Last year we decided to get my car and drive around the City and admire all the lovely Christmas decorations.

We drove down Park Avenue, every window showing happy scenes of  a Dickensian Christmas in one form or another. I finally got tired of Julie telling me how depressing it was and finally settled on eating at the Indian restaurant on my block, the only place that would take last minute guests.

The one high point of that evening was that Julie’s boyfriend, who was with his family in Iowa which is very near Tennessee and just outside the Baltic Region, called the restaurant and paid for our dinner.

The point of this whole thing is that both Julie and I love Christmas. Even though we’re Jewish, we’re not fanatics and this is a lovely holiday.

Since our poor planning ruined this glorious day for us in the past we decided that this year we won’t get caught with our seasonal pants down.

We’re going to plan ahead and because we’re way early we’re setting our sights high.

I called The Waverly Inn, a restaurant that screams Christmas but they won’t be open on Christmas day.

Next Julie decided use her go to source, Twitter.

Most of her followers just goofed on us for being losers and the ones who took us seriously didn’t get the concept of “festive”.  They suggested cuban chinese or diners.

So I’m appealing to you, my beloved readers, give us an idea of where we can eat on December 25th.

And don’t come up with that shit that Julie’s Twitter friends gave us.

It has to be fancy and in New York and we prefer Manhattan because I’m pretty sure that’s where Jesus was born.