I was counting on going to Montauk to bring 2015 in with Susan and Allan. It wasn’t to be.

My niece Laura had an operation on her foot that turned out to be more painful than she expected. I just wanted to hold her.

Stephanie picked her up and brought her to her house so that I could go up and rub her head. She likes that.

She said that next to her mother, my sister Iris, I was the second best head rubber in the world.

In spite of her delicate condition I was forced to remind her that her mother being dead pushes me up a notch. She couldn’t disagree.

Anyway the day before New Year’s Eve I packed up my suitcase and my dog and left for Newtown Ct. I was staying the night.

It’s an hour and a half ride with no traffic made extra enjoyable by Ray sobbing and looking out the window the whole time. My Montauk house is 3 hours away, again with no traffic, that will surely be a trip from hell.

Once we got there it was great. Raymond truly enjoys most of his cousins. The 2 cats and 2 dogs are favorites.

Here he is with Lucy.

But the horses and donkeys piss him off no end. He screams at them whenever they look his way. 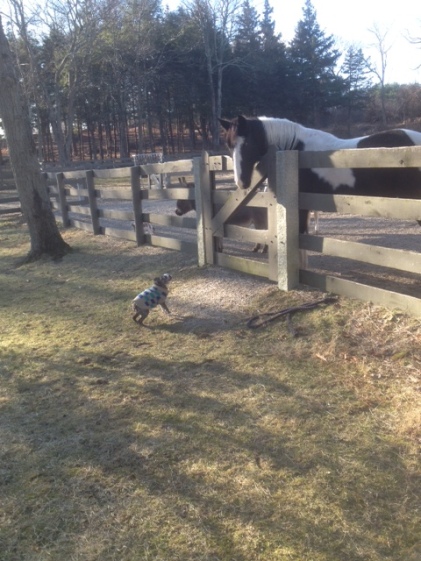 It was a nice change of pace for him but he’s a city dog at heart. While his cousin Theo watched for trespassers he anxiously wished that someone there recognized that when lunch is late he just isn’t himself.

After a lovely run in the woods Ray and I returned to the City for New Years Eve. And yes he cried all the way home.

I brought in the New Year with Julie’s boyfriend since she was still visiting her parents. I really had fun with him.

Ray would have joined us but he refused to get out of bed. I think I heard him mumbling something like “Why would anyone want to live so far from a McDonald’s ???”