I have no business writing this blog now because I have too much to do.

I have to pay my bills.

My nephew Brian thinks that’s all I ever do but it’s more stressful since dave got hacked and someone stole his social security check. I have much less money to pay for stuff until this is straightened out.

Luckily I have the voice of an angel so a few hours of singing in the subway with my niece Violet playing the ukelele should more than make up for that short fall.

I don’t see her much during the day because she closes herself in the guest room working on her book.

I love her very much but it isn’t all candy and roses having her here. The bad part is that she’s here so often that she’s comfortable enough to be bossy.

We went out to dinner last night and we both had steak. There were leftovers so I advised the waiter to wrap it up for the dog.

I thought Cheryl would blow a gasket.

“You are not giving that steak to Ray!” (Did you see the exclamation point at the end of that sentence? Because there were about six of them in the air when she said it)

We got home and Ray was resting before his late night snack (which he had every reason to expect because he knew I had been to a restaurant) and I caught Cheryl whispering threats to him daring him to go near the “doggy bag” in the refrigerator with a mean smile on her face. I believe she even had shreds of meat in her teeth to taunt him. 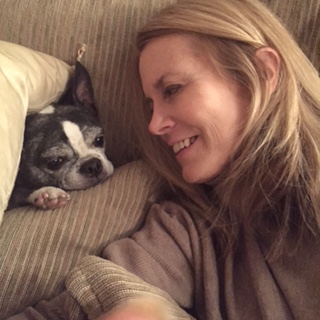 Like I said “sweet” Cheryl has some thorns on her.

She does try to be helpful though. Today she emptied the dishwasher. I wonder how long she has to be here before she gets “GLASSES ON THE RIGHT, CUPS ON THE LEFT”

Am I sounding too critical? I hope not. I love her like crazy and so does Ray because we both know that she has to sleep some time and when she does my little boy will chow down on that steak.

In fact….. maybe he already has.