It was really fancy. Everywhere you looked there was something highfalutin to eat or drink, caviar, rare cheeses and luckily m&m’s WITH peanuts. I plopped myself right down next to them.

Plus Martha Stewart was there.

Nicole or Daisy, as she is known, is Martha’s make up artist and clearly friend since Martha didn’t just make an appearance, she stayed the whole time. I found it interesting that she was much smaller than I expected and really quite beautiful.

I was on my best behavior. I didn’t want to embarrass Sue and Nicole so I told the bartender to make my drinks strong enough so that I could get a buzz but not so strong that I’d take out my tits.

While I was sitting on the couch nursing my cocktail and shoving m&m’s in my mouth I went over what I’d say when I was introduced to Martha.

I finally settled on “Charmed, I’m sure”. I was thinking that if I said it in kind of an english accent I might impress her enough to invite me to one of her soirees.

I had already sent the couple a lovely engagement gift.  Even though I adore Nicole and have since she was a baby I saw no reason to give her a shower gift too.

I’m a woman alone and I’m counting my pennies but I didn’t want to look cheap to the other guests (Martha) so I gift wrapped a can of corn and just hoped that there wouldn’t be some big present opening section of the festivities.

I’m not really good at parties and I think the bartender may  have begun to ignore my instructions since I felt a bit warm and when I opened up my top button I figured that it was time for me to make my exit.

Next to the m&m’s were some coasters with the sweet couple’s photo on them. I assumed they were remembrances for the guests so as I was leaving I slipped one in my purse. 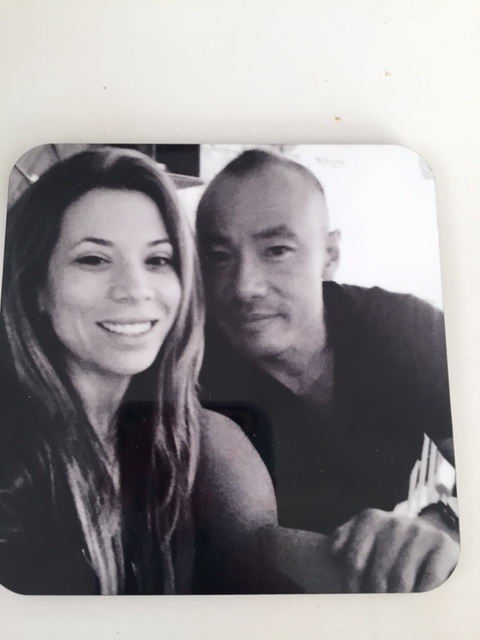 Hey if they didn’t want anyone to take them they should have glued them down.