Just yesterday Julie was saying she can’t thank me enough for my love and dedication to her during this time of trial.

She wanted to be a guest blogger but felt she was too weak to do it justice so she asked me to do it for her.

Remember these are her words not mine.

It’s been over three weeks since my foot surgery and without the devotion and love of my wonderful aunt Mattie I wouldn’t be talking to you now (through her).

Even though she hates to 1.leave her house and 2. leave her dog,  she shows up each day to feed and bathe me.

She’s even made full dinners and lugged them over to my house so that my loving boyfriend and innocent daughter could eat too.

This is no surprise to me. She’s had my back in good times and bad.

She’s always been the “fun aunt”. Here she is dancing with the ice box (I believe they call it a refrigerator now) before I was even born while she was just a teen 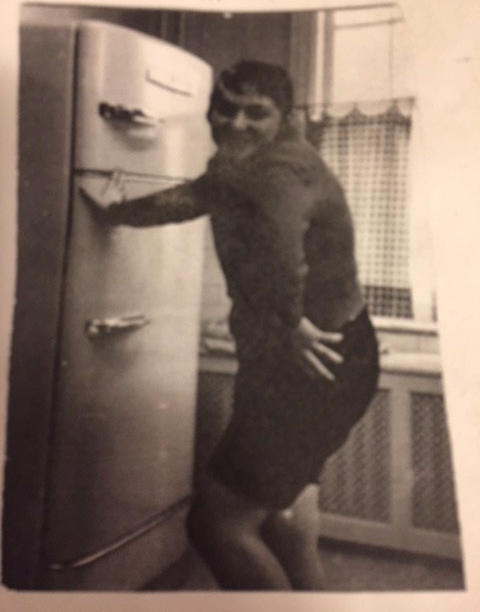 Her greatest trait is her willingness to jump right in and do what needs to be done with out even thinking about her needs, be it suffering a debilitating stabbing or various aches and sprains. I believe there was some kind of head wound involved too but since she’s not a complainer I can only guess at that.

She still perseveres suffering in silence while disappointing her beloved pup who each day looks hopefully and the door as if to say “Can I come too Mom?”

“Not this time, my lad. Your cousin Julie needs me and her untrained vicious mutts will make mincemeat of your purebred self.”

At least that’s what I assume she said.

Here’s a picture of one of my dogs trying to eat my foot so she isn’t wrong.

Although nauseated by my purple foot and later the hives I broke out in (Editor’s note: what kind of moron doesn’t mention that they are allergic to penicillin when they’ve had a reaction before?) she nevertheless cared for me always making me feel that it was no bother by reminding me that “There’s no such thing as patient care without a certain amount of gagging”

So for this reason I nominate my Aunt Mattie for Citizen of the Week, nay Year!