I was sitting in my living room having my cocktail and reading my book when I heard “Black Lives Matter” shouted from the street.

As I’ve mentioned before I’m 76 and I’m terrified of this virus.

I haven’t touched or seen in person any member of my family or friends in months.

I haven’t gone to any marches because I’m afraid of being with a lot of people in crowds.

But this was different.

They were coming to pick me up.

I could matter again.

I tried to convince myself that I had done my part in the sixties facing police on horses in riot gear with no fear in my heart.

(Actually that’s a lie. I was scared to death and I seriously thought of running home.)

I looked at Debby.

“We’re going out to join the March !”

But first I had to put on pants.

And Debbie’s halter and leash.

My BLM shirt has not arrived but I was wearing a Hillary shirt so that would have to do.

I got in the elevator and went down to the lobby.

My doorman pointed uptown and said “They went that way”

The March was about 3 blocks uptown.

I tried to catch up to them. I really did.

Debby peeing every few feet didn’t add to my speed.

Finally I gave up and  went home.

Black Lives Matter but maybe I don’t matter any more. 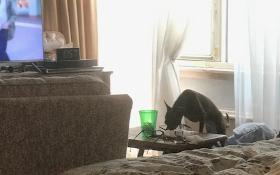