I keep saying that 3 months ago my life was set. I just started counting back. This first started five and a half months ago.

Lordy Lordy am I still going to be whining in a year?

Today I screamed at a cab driver. Not that he didn’t deserve it. I was carrying 5 bags of groceries so I took a taxi home. (2 melons in the mix, one of which I’m going to have to throw away because I read that cantaloupes give you beri beri or something).

He kept ignoring my directions and a trip that should have taken 20 minutes at most and should have cost $10 ended up taking an hour and costing $22 ! It would have cost more but I demanded he let me off in the middle of 57 Street and Park Avenue.

I yelled all kinds of nutty things at him like “You should be ashamed to call yourself a taxi driver!” I’m sure that cut him to the quick.  You couldn’t really tell because he kept smiling and nodding but I felt terrific.

I still tipped him. I’m not an animal.

When I got out of the cab the traffic light had changed and drivers in other cars were honking at me and giving me the finger.

This being one of my cut off your nose to spite your face moments, my arms were like gorilla arms by the time I got home from carrying those plague laden melons. 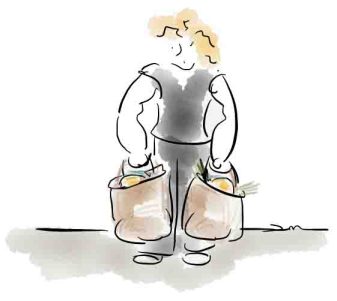 Since my meal ticket went on the lam I’ve got to be more careful with a buck.

Back to important things. When I left the house this morning who should I pass on the street?

Yep it was Ric Ocasec, lead singer of the 80’s group, The Cars. I was so happy to recognize him that I said “Oh Boy” under my breath as I passed. He seemed surprised at this and glanced  at me for a second and then turned away. Maybe he wasn’t happy that someone 67 recognized him. Although since he was dressed exactly like he was in all his videos only a chimp wouldn’t know who he is.