I was just listening to my niece, Julie’s interview on the Brian Lehrer show. She was discussing a very serious topic, dogs in shelters.

In the midst of this interview a throw away line, the title of this post about her dogs who had been housebroken for weeks but just peed on the floor losing their 30 day chips, made me burst out laughing.

She was this way since she was a kid. She sees the world like no one else and is constantly cracking herself up. If you’re lucky you hear the things she mumbles under her breath so you can laugh too.

In fact if I were to be honest if she had never gotten married I think I wouldn’t be separated now.

Before Julie met Paul, while she was “finding herself” she spent alot of time with me and dave. In fact we always celebrated our anniversary and valentines day together. I remember going into a fancy restaurant and Julie requesting a romantic table for 3 in the corner. There’s a lot about this period in her life in her book “Please Excuse My Daughter” 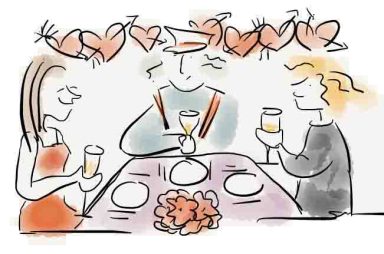 In her twisted mind once she married Paul she felt that he would want valentine’s day to be just the two of them so she no longer spent that holiday with us and without her we never made much of it either.

Now I’m not blaming her but if dave had those dinners with Julie to look forward to, he might not have had a wandering eye.