I  had a lovely evening.

I went out to dinner with an old friend of ours, Jim Pugh.

Since I have never been with him alone I wondered if we’d have anything to talk about.

It turned out to be no problem at all.

He’s extremely easy to talk to and he had a million old musician stories. He’s also played with so many famous people I could pump him for inside info on celebs.  I love hearing about that.

We skyped his wife and son when he got here. His little boy kept kissing the computer. That’s not hard to look at and clearly his mother doesn’t mind spit all over her iPad. 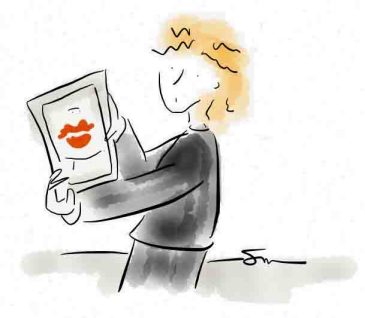 Just as he was leaving he said that when he called me yesterday he almost didn’t think it was me. He said my voice seemed lighter than he remembered it to be.

I think it’s because happiness is sneaking up on me.

I spent the last thirty six, almost 37 years of my life trying to make someone else happy and successful. Now it’s me I’m working on.

Anyway I had a nice time.