In the 80’s and 90’s my group of friends were securely married. We all still looked okay and our husbands, all musicians were doing pretty well.

I’m not going to say we were all crazy in love but we loved and felt loved.

One couple stood out. Fred and Karen Griffen. Both musicians which was a little unusual in our crowd. Karen was a virtuoso flute player, who played with the Metropolitan Opera, the rest of us were just wives.

But that wasn’t the thing that made them different.

Fred was hot for Karen. I mean hot. If she bent down and he saw her bra he would get excited. There was one story that they told about him fixing the roof or something and he happened to look in the window and Karen was taking a shower. He just watched her without saying anything. 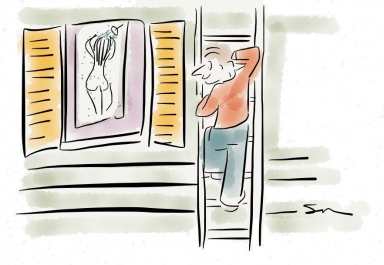 When he told us all this story we all yelled at him saying who cops a peek at his own wife naked? But when the women talked later we admitted that though intellectually it was creepy we were a little jealous that none of our husbands would ever think of doing that.

Another side of Fred was that when Karen started going through menopause he bought a book on it so that he would know what she was going through and he could be sympathetic.

Now I know that no one knows what really goes on in another person’s marriage, but I thought I knew Fred pretty well. dave and Fred went to college together and were good friends. And I really loved Fred. In fact when we got together as couples, often dave would talk to Karen more and I would hang with Fred.

They came to our wedding. We traveled together. Fred had been in dave’s big band since it’s inception.

Your can imagine our shock and the shock of all our friends when fred (he get’s a small f during this period) fell in love with a young girl and Karen and fred got a divorce.

It scared all the wives. Even though as I’ve always said, I felt safe, it scared me.

The other guys in the band were all yelling at fred because their wives were all mad at them because of what fred did.

Everyone started to refer to fred as ‘fred the shit’

When the band would gather I would say “Hello, musicians, hello fred”.

It upset me so much that I wrote a song, “Stranger With The Face of My Best Friend”.

Part of the lyric was:

I thought I knew that he would always be

The one who was the other half of me

But now there’s just a shell

Where there used to be love inside

Anyway I didn’t have much to do with fred for years until I saw him right after my sister, Phyllis, died. He came over and put his arms around me and told me he knew how much it hurt and what she’d meant to me. He became Fred again.

I got the sweetest card from him for Christmas. It made me miss him.

5 thoughts on “116. The original “Stranger With The Face of My Best Friend””