My head aches from all the thinking I’ve been doing over the holidays.

I wrote a letter to my lawyer today with all my wishes in the settlement department.

Since she has absolutely no sense of humor I left off the choking him until he’s unconscious and not in the sex way.

Besides everyone has told me that since she charges so much, each joke probably costs me 30 bucks. I should learn to speak to her in twitter -speak, b/c instead of because etc.

I’ve also gotten a few suggestions to change the name of my blog from 67anddumped to “67 and finding the new me”  or some such shit.

Being dumped at 67 will not define me but it will always be a part of me.

It has begun an important and unexpected chapter either for good or bad and I have no choice but to own it and move forward.

I know I am both looking forward to and fearing what comes next. I also know that I’m happier than I would have been if it had never happened.

Except for my sisters dying, this is by far the worst thing that ever happened to me in my life and that includes sneezing and farting at the same time in the second grade in front of Richard Sheslow and David Gillis during Assembly and believe me that was no picnic. 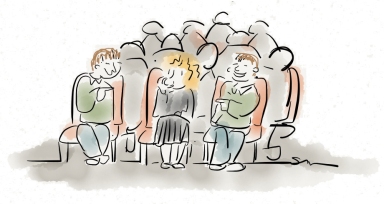 By the way, I also hate the term “define me”.