Like most people I’ve always been afraid of the dentist.

After a long time without taking proper care of my teeth I went to a dentist recommended by a woman in my building. It was her daughter.

She was perfectly nice and very competent but while I was sitting in the chair I heard the voice of the dentist in the next room. It was so familiar and comforting that at that moment I would have given anything to be his patient.

I knew that this would be impossible because you can’t change to another dentist in the same office. But then, after a bit of thought, I figured  difficult, not impossible.

So I made dave make an appointment with that dentist. After he went to him a few times it was only logical that a husband and wife should go to the same dentist.

The first dentist never willingly spoke to me again even if I met her in my elevator when she visited her mother. I couldn’t blame her.

Now remember I did all this without knowing one thing about his ability.

He’s never hurt me and he kisses me on the lips hello and good bye. A win win if I ever saw it.

He once stood on his feet for 9 hours with few breaks because I didn’t want to go home with any gaps in my mouth and I’d have to do that if he broke it up into 2 or 3 days which is what any other dentist would have done.

And kindness breeds kindness. I really liked everyone in his office.

For years I’ve been having my teeth cleaned by the same woman. I won’t give her name because she’s a very private person.

When I first met her there was  a calm and light coming out of her. She spoke of her family and her old dog with such affection.

I remember thinking how lucky they all were to be surrounded by her warmth. 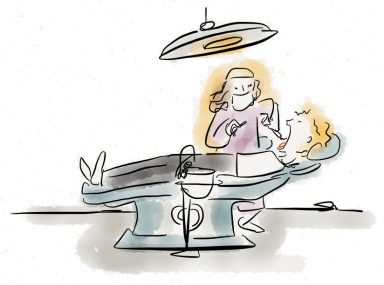 She loved to read. She recommended books to me and I did the same for her. After I gave her Julie’s first book we had a lot more to discuss because it talks about my family.

But more importantly I really liked her and she seemed familiar to me.

I only got my teeth cleaned when she was available.

Then one day I got there and the light was gone. She had suffered a terrible tragedy and only the shell of the woman I knew was there. Again, she’s a very private person so I won’t give any details.

A year passed. Each time I saw her her eyes were still empty. You could see that she was simply existing. Not joining in with friends, not really doing anything even reading for the longest time probably because any form of pleasure seemed like a betrayal of all she’d lost.

As time passed however she started coming back to herself. Never quite herself, but close.  The kind of light that this woman possesses can’t be extinguished, it can be lowered for a period of time but it can never be lost.

She had other people and things to live for and the heart in her couldn’t remain cold to them forever.

When I told her about what happened to me and dave, I was surprised at her strong reaction. In spite of the obvious fact that my story was chickenshit next to hers she empathized with me . She seemed even madder at dave than I was.

What made me talk about this now?

I had my teeth cleaned today. My teeth are so sensitive that I hate doing that more than root canal but when I sat in that chair and looked up at my friend I felt calmer.

I hope time gives her the peace she so deserves.

And I hope that someone gives dave a fat lip and a noogie. She’d like that.