I had dinner with Ronnie last night.

She suggested “Ocean Grill”. It’s one of my favorite restaurants but it’s a bit pricey and my first reaction was I don’t want to spend so much money. I’m more of a diner girl now.

Ronnie said we hardly ever eat anyplace nice any more so let’s treat ourselves. I actually didn’t need that much encouragement.

I got there a little early so I sat at the bar.

I got into a conversation with the bartender, a pretty young woman about Cosmopolitan’s that aren’t too sweet. She made me one and it was perfect.

A man sat down next to me smiling and said “You must be my date”. 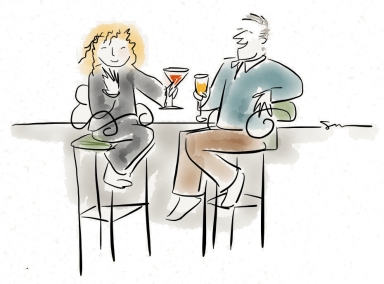 I knew he was just being charming. He was close to 10 years younger than me and really handsome.

He, the bartender and I were chatting away and laughing.

All of a sudden I realized that I was having a feeling I hadn’t had in so many years. I was enjoying being in the presence of an attractive man.

Now let me be clear. This guy was warm and friendly but we weren’t flirting or anything..

If you had asked me yesterday if I ever wanted to date again I would have given you a resounding no.

I still am no where near ready and I would never get married again but I enjoyed the attention.

I even told the two of them how I was feeling. Naturally I mentioned getting dumped after 36 years of marriage (Ronnie says I can only do that for a year and then that has to stop)

The bartender told me that her mother had been married for 40 years when her husband left  her for her friend.

I suggested she read my blog. She was looking for a pen to write it down when I asked for the check because I could see Ronnie coming in.

I said “No No” when I realized that he meant the pen, not my drink. Talk about awkward. He looked like he was gonna faint.

Since this whole conversation had a real impact on me I warned them that I’d have to write about them.

Frank gave me his card so I’d spell his name right.

6 thoughts on “142. Frank J. Castro, you gave me something better than a free drink, but the free drink wouldn’t have killed you”