I’m leaving for my trip to Portugal and Spain today.

I’m so excited. I just want to get away and be with my sister and shop and laugh and have delicious drinks in the town squares.

The airline isn’t making it any easier on me.

Every time I go on line they give me another departure time and flight time.

Here’s what’s giving me anxiety. It’s a night flight and I am sitting in a middle seat because my sister has long legs and she needs the aisle. Therefore I have a choice of putting on my banana nose breathing machine or snoring so that no one else on the plane can sleep. I’m leaning towards the latter. Am I my brother’s keeper?

In addition I wrote to the tour guy for dave’s tour and said if they don’t pay me  I won’t do the visas. (Hi backbone, where ya been?)

I got no answer but he is in New York and he wishes to see me. Probably as David says, to “jew” me down.

Dave forwarded me a letter he sent them saying that they better pay me because I won’t do it if they don’t.

I wrote  back to him and said “See? You still watch out for me even though you’re a lying skeeve”

Here’s another thing that’s weighing on me.

I think Capt. Hugh is dead.

He never misses a holiday and I mean Groundhog Day and Mother’s Day even though I’m clearly not his mother to call and bemoan his situation.

Easter came and went and nothing.

That is not good.

Liz came over to wish me a BonVoyage and a hug.

1 if there’s any problem on the boat push everyone aside and jump on a life boat since only on an English ship will they adhere to women and children first. In Spain, no way!  Each man for himself.(that’s him talking)

2. If there is some kind of political insurrection, and there will be, don’t go to the American Embassy. Go to the Canadian or his beloved British Embassy.

3. Avoid all public places. That should make for an interesting trip.

He’s been unusually nice to me. He even took me out to dinner last night because as he says, “Planes go down and ships sink”. 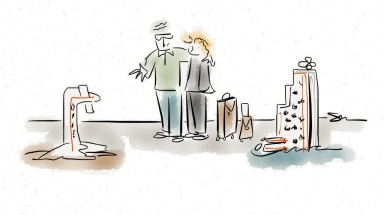