Miss Liz and Rupert are back. All is right with the world.

Last night David came home too so for the first time in eons we shared the morning together.

I happened to mention that looking at my blog map I noticed that Canada is bigger than the United States. There is nothing David loves more than me saying something stupid.

He went on this giant rant about how every first grader knows this and how we should be importing more oil from Canada but because of Obama we are taking it from the arabs. (I think he called them something else but this time it was in a whisper because Liz was ironing a shirt right near him. His slurs had the words “jockey” and “towel” in them)

He was prepared for me to look at him blankly so he could go on some  kind of tirade about how uninformed I am and then he could proceed to spew out everything he knows on the subject but I surprised him.

He was momentarily speechless, something that doesn’t happen often. Then he said “You do not. Go ahead tell me about it.”

He was still sputtering when Liz told him to get off the couch. She had to smooth out the cushions because they were having some French people over for drinks.

He got up and went to the other chair. As soon as Liz fixed the couch Rupert immediately jumped up on it. David looked at Liz to see if she’d tell Rupe to get off but she kept ironing. 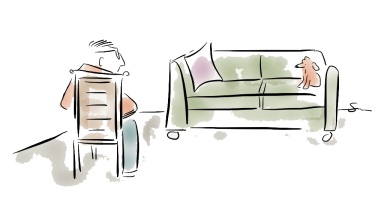 “How come I have to get off the couch and that fucking dog can lie all over  it?”

He said this in a very soft whisper. He certainly wouldn’t want Lizzie to hear him.