Going to Brooklyn to have mani/pedi’s and lunch with Susan.

I’m going to the chiropractor first. I have a stiff neck. I’m pretty sure it’s tension because last night I took 1/2 a tranquilizer and I felt a bit better.

Why am I bringing this up? Because as a writer ( I call myself that now) I look at books where the author documents their deterioration from some dread disease and they get a Pulitzer Prize so I’m sticking my toe in that water.

I’ve mentioned my slow loss of marbles before but it’s moving forward at lightening speed.

I lost my chiropractor’s card so I went on line and tried to get his number there. I’ve been going to him for years but I don’t know his number by heart.

I googled Michael Fox in NYC.

I tried putting in my zip code to get nearest chiropractor named Fox near me. Nothing

I spelled it Foxx.

My sister called and I told her that I was worried. Maybe he isn’t a real chiropractor and that’s why he doesn’t want to advertise.

Before calling someone else I tried one more thing. Googling the address with Chiropractor and no name. 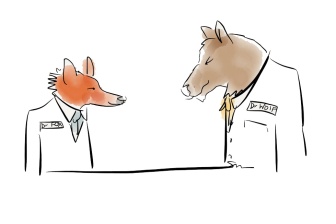 4 thoughts on “258. Giraffe, Elephant. Six of one half a dozen of another”