Yesterday I attended the memorial that was reason why I made this long trip.

I wanted to support Liz and her family in remembering Nan Rees, Liz’s mother.

When someone dies, the people who are left behind to speak of them do so in glowing terms, frequently overstating their good points and ignoring the rest.

This wasn’t really like that. Well maybe a little but the worst they could say about her was that she yelled at the TV and didn’t suffer fools gladly or quietly.

The good she was couldn’t be overstated. She lived her life not only for herself and her family and friends but she was determined to make the world a better place before she left it, particularly for the women and children of Africa and animals everywhere.

It spoke volumes that there were well over a hundred people who came to a place that had no direct flights to pay homage to this incredible woman. And these weren’t people with nothing to do. There were captains of industry and movers and shakers. And they weren’t there for any reason other than friendship and love for Nan and Dr. Tom.

First her children spoke. I can only say that there isn’t a mother on earth who wouldn’t want to be remembered that way.

Then a series of women spoke.

Her friends, they say you can tell a person by the quality of their friends.

These women were all incredible. They each had anecdotes and seemed to come from different places but then I realized that they were all saying much the same thing.

The overriding theme was the love story between Tom and Nan. You only had to spend a short time with them before you saw what a complete loving pair they were.

Nan had very strong opinions and didn’t accept people easily but once she did you became family. I didn’t know her as long or as well as most of the people in the room but since I loved her daughter, I too was welcomed into the fold.

She was a happy woman with a sense of wonder and adventure.

She worked tirelessly for Africa. She asked that her ashes be spread there so she could become a part of the land she loved so much. 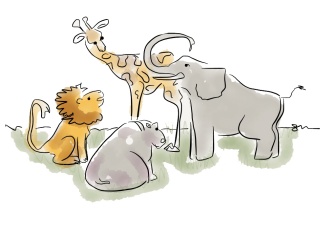 She ended her life much the way she lived it, with bravery and grace.

There isn’t much more I can say. Yes she will be missed but she left such a strong imprint on all the people that she touched that she surely will live on in all of them.