Skinny people take their time eating because they don’t consider dinner a job. I will never understand this.

The other night I went out to dinner with my nephew Barry’s wife, Teresa and his childhood friend, Jack and Jack’s wife Ann.

I know Jack and Ann are grown ups. They have big kids but I still look at Jack as a teenager. By her connection to him, I feel the same way about Ann. Jack hasn’t changed at all, not in looks or grownupedness, Ann too.

Anyway we all had a lovely dinner.

At the end of the meal I was talking to Ann and Jack and Teresa were deep in conversation.

The waiter came over and asked if he could take the plates away. Everyone had finished eating. At least that’s what I thought.

He cleared the first three settings  but when the waiter tried to take Teresa’s dish, she put her hand up and told him “I’m not quite done” then she continued her conversation.

I looked at her plate. She had one bite size piece of sausage on it. Nothing else.

Although I was ok with her not wanting to give that last bite away, I was puzzled by her not just popping it into her mouth.

We all had had some wine and those three were happily dragging the evening on because they were having fun. I on the other hand, am old and wine means snooze time. 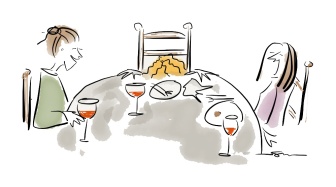 Only after the waiter had returned 3 more times to ask if he could remove her plate and each time she shook her head no while continuing her conversation and not making a move towards downing that last morsel, did I realize that I had to say something or we’d never get out of there and it was only minutes before my head would fall down on the crumb laden table in a deep sleep.

I love my niece Teresa and I pride myself in being subtle and diplomatic. I certainly didn’t want to make her feel uncomfortable so I simply said, “Will you shut the fuck up and eat that sausage”

That seemed to do it. I was home and in my bed within 15 minutes.