My nephew is here from Israel.

News is coming in constantly about the missiles going deep into his country.

This morning I read that 4 missiles hit Ashdod, the town he lives in. that is where the majority of his family is now.  The phone calls back and forth from his wife and children are chilling.

He’s in Brooklyn for the Sabbath so I won’t be able to speak to him until tonight but yesterday I looked at him and he appeared calm. I asked him “Are you terrified?”

He shrugged and said “Obviously I’m concerned but we’ve lived like this for so long so…..”

Nothing I write here can describe what’s going on in the Middle East so I won’t even try. I’ll just go on and write about the drivel that is my life.

Eric, or Yitzhak as he’s been known for over 30 years, is here to visit his mother’s grave. He comes every year at this time.

We went very early yesterday morning because he had to get to Brooklyn for Shabbas.

On the way up I explained to him that even though I don’t believe that my sister Phyllis is really there I will accompany him and maybe say a few words to her. He just smiled. He is very sure of his religion and loves me even though I’m a heathen.

We arrived at the cemetery and started looking for the stone plaque over my sister’s grave. We both thought we knew where it was and we started walking up and down the aisles in totally separate areas.

We couldn’t find her anywhere. We were searching for easily 40 minutes. I was just about to suggest we give up and leave a message with Sylvia Goldfarb, b.1933  d. 2005, a woman close to my sister’s age,  to give to her when she sees her when Eric calls to me and says he found her grave under a big pile of leaves.

We push aside the leaves and while Eric goes to get some water so we can wash off the stone, I decide to say a few words to Phyllis.

Before I know it I’m sobbing and telling her how much I miss her and how much easier this year would have been if she had been here. 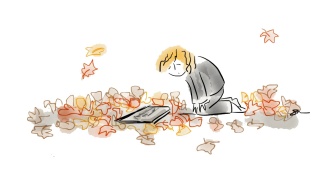 Yitzhak came back, put his arms around me, said his prayers and then carefully washed off his mother’s gravestone.