“How ya doing, Captain?”

Tonight Julie and Paul are taking me to a fancy restaurant for Thanksgiving dinner. I don’t remember the last time I wasn’t having the whole family for this holiday.

Steph said I should wear a wrist corsage and comb my hair nice.

Last night David sent me the “cocktails?” email and I shot over.

The holiday must have softened him because he asked me twice to join him and his son for dinner. Unfortunately I had to decline because I had my mind set on wonton soup.

Anyway while I was helping him polish off a fabulous bottle of wine he had to take a few phone calls . I love to listen in on his business calls. He throws around millions of dollars like they’re farfels. He frequently peppers his conversations with stuff like “If they can’t come up 3 million, fuck’em”

I think I told you that after the election David decided to become a Democrat because he wants free stuff . But he insists that he is “clinging” to his guns (he always puts in the air quotes because apparently President Obama used that term) since “society as we know it will surely crumble”.

It seems he was at the bar at “Smith and Wollensky” a nearby steak house, and he struck up a conversation with a couple also having drinks.

“This guy worked for Blackwater. He was a marine sniper who had joined the Navy Seals. We were talking for about an hour and a half and he took out his iphone and showed me photos of some of his kills”

“WHAT?” he finally even shocked me.

“Yeah they were really something. It looked like one guy had the top of his head blown off” 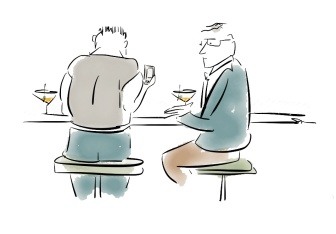 “David, this guy wasn’t sane. What kind of Navy Seal would show pictures like this to someone he meets in a restaurant? If he was any kind of Seal he has obviously gone over the mental patient cliff.”

“They were nice athletic looking people. I’m sure they were Republicans”

I just hope that dope didn’t give that nut his home address.

One thought on “276 Dear Satan, Even tho my friend will end up living with you , remember he was a good father.”