I know I sounded sad on my last post but that was just momentary and beside I won’t be writing anything like that again.

The next day I went up to Steph’s . She never minces words. When she picked me up she told me that she wouldn’t discuss my last blog. Then she proceeded to discuss it.

She said she was disgusted by that post because I should be over this already and if I don’t hate dave then I have no self respect.

She’s an interesting girl. We were out yesterday having a wonderful lunch with her sister, Randy and her husband Adam.  On the way home she wanted to stop and get her husband a cigar because it would make him happy.

When she gave it to him I said “She loves you so much” and he laughed and said “I know but the only reason I do is because I gleen it, not from anything she says”

And I realized he’s right. She rarely says anything nice to us but we know she loves us and we can count on her like the morning.

She’s just like her mother. I never felt so loved my anyone in my life but she never me showed any affection. I remember we were on a sailboat once with dave and Iris’ husband Bernie.

A bad storm was brewing and none of us knew much about sailing at that time but when the coast guard came by and asked if we needed help, Bernie said we were fine.

Iris was furious. While she was telling Bernie what an idiot he was she was roughly putting a life jacket on me. The rougher she was, the more she loved you.

I have a lot to do today. I”m quite busy.

I’m going to Costco with David this morning and this afternoon I’m meeting two of my favorite people Brenda Copeland, editor extraordinaire and my darling Julie for cocktails.

I like having cocktails. Especially with those two. They really know how to party.

Then it’s home for the Superbowl.

I thought I’d still be up at Steph’s for Superbowl so I took David aside the other day and said that I had some very bad news for him.  I wouldn’t be able to share the Superbowl with him.

I don’t know why I always have to push my way into his apartment. It’s not like I’m not useful and he’s not a dope.

For the past week he’s been showing me his iPod that Lizzie bought him for  Christmas and telling me. “It won’t do anything. I charged it and it’s just blank. And I put all my music on it.”

And he didn’t just tell me once. He probably told me 10 times. He just looks at it sadly and shakes his head.

“Bring it back to the Apple store. It’s new”

He looks at me with a shocked expression. “I’m not going into that madhouse”

I said “Listen I’ll be near there today or tomorrow. I’ll bring it back. Where’s the receipt?”

When I called Liz she didn’t even sound surprised that I was doing this for him. She knows that he can’t do stuff like this. He travels all over the world doing million dollar deals but he’s afraid of the Apple store. 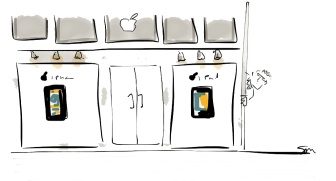 You know how it takes a village? Well one member of that village is in Santa Fe and she’d better get her ass back here soon.

Now what’ll I wear for the Superbowl?

4 thoughts on “318.Different kinds of love and the Superbowl”