Yesterday morning we had another vet appointment.

Since a big snow was expected my plan was to drop Elvis off,  go out to breakfast, pick him up and take him home. Liz insisted on coming with me because I’ve been known to cut and run. She also came as another pair of ears because  the whole time the vet speaks to me I stare knowingly at him and nod while hearing nothing but the loud scream in my head.

When we get there the vet tells me that we couldn’t wait for him but because of the snow we could come back at around 3.At least I think that’s what he said. What I heard was EEEEEEEEEK!

Before I knew it Lizzie and I were chatting over pancakes. I hadn’t had pancakes since I was 7 but it seemed like the right choice.

The snow kept getting worse and worse but this is New York and I’ve never seen Manhattan brought to it’s knees by a little weather. The constant traffic always keeps the streets clear. It’s not like this is Iowa or something. We got places to go.

So at about 2 o’clock we leave to pick up the prince. The vet is a straight shot down second avenue. A straight 25 block shot. My first shock is that there are no cars on second avenue. It looks like a ski slope.  But we know that the buses will run so we wait at the bus stop for about 20 minutes with a bunch of other people.

Finally Liz says “Look, you wait for the bus. I’m going to walk on ahead”

“You’ll just slow me down. I walk 5 miles a day in Santa Fe. This is nothing for me”

She just looked at me with disgust and took off. She knows that unless someone moved Bloomingdales 5 miles away from my house rather than across the street that isn’t so.

So I wait. A little ashamed that my much younger friend is doing something that I should be doing.

Finally one of the women waiting for the bus says that she works across the street and she hasn’t seen a bus all day.

I call Lizzie on her cell and tell her to turn around. I’ll call the vet and say we’ll pick him up tomorrow. It gave me a sinking feeling because Elvis is just starting to know that he has a home and I felt like I was letting him down but I really love Liz.

Liz just said she’s almost there. I worried about taking the cat out in the snow with his respiratory infection. Liz says she won’t take him unless the vet says it’s ok.

Long story short ( I know, it’s too late for that). Liz walks all the way home with Elvis wrapped in a blanket on her back, stopping in banks on the way to make sure he’s ok. Which he was and he was also grateful to her as evidenced in these two photos: 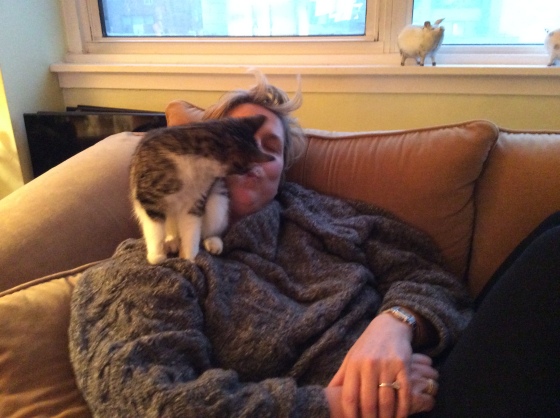