Yesterday Ray wasn’t himself. He was listless and he seemed depressed. I wanted to die. 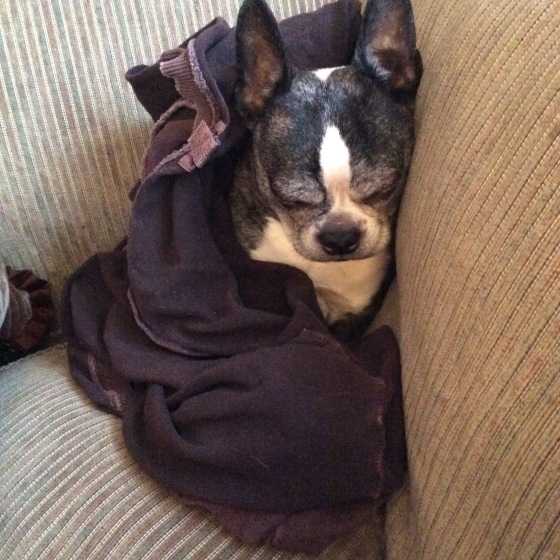 He was eating and everything but he just wasn’t acting normally. Naturally I went right to Leukemia.

When we went over to David’s house for coffee as we do most Sundays, instead of running down the hall he just slowly walked. He didn’t twirl once.

David was alarmed. He kept saying “He just ain’t right.”

It reminded me why I shouldn’t have a pet. I suffer so much when they’re sick.

Since his symptoms were vague I went to Facebook for advice. That is after calling my sister and Julie to see what they thought.

Luckily one girl who I really trust because she has a goose and bees wrote right back to me with test questions. Is his stomach distended? Does he seem in pain? No and no.

She did advise me to save his stool so if I take him to the vet I’d have it to give him.

He did seem better at the end of the day.

We went to David’s for cocktails. Ray didn’t run but he did walk down the hall at a steady gait. He seemed better.

Though David felt he wasn’t totally okay he saw that he was improving.

While we were talking I mentioned that I had saved Ray’s stool and put it in the refrigerator.

I knew he heard so I didn’t feel any need to repeat myself.

“That is so disgusting I don’t even know what to say. Shit in the refrigerator?”

“It’s in a plastic bag. I know it’s there. No one’s going to eat it by mistake.”

“It’s freezing outside. Why didn’t you put it on the terrace?”

“You may be right. After all I am pretty forgetful lately. I’ll move it. Better safe than sorry”

“Don’t let anyone know you put shit in the refrigerator.” He kept looking like he was going to throw up.

“There is absolutely no hope for you.” He made a gagging face.

Ray and I decided that we didn’t want to stay where we weren’t appreciated so we went home.

I didn’t start breathing normally until this morning when Ray seemed better and ate his eggs.

Maybe later I’ll invite David over for some chocolate pudding.