What is this you ask? It’s the seal that only the winner of an NATJA Bronze prize for writing can display.

That happens to be me.

They also gave me a form to submit to my local paper.

Thinking that The New York Times is as local as you can get, I chose them.

I was sure they’d want to print it so they could make the glitterati aware of a celebrity in their midst. Or maybe just a “Local Girl Makes Good” piece.

Much to my surprise it was returned.

In spite of that I feel like all of a sudden everything I touch is turning to gold (or bronze).

Yesterday Applecare got my computer that has been running slow for a year to move at my lightest touch.

I was racing around at a bunch of sites and I happened to come upon ads for the Westminster Dog Show.

There wasn’t one dog better looking than Ray so I got to thinking…. Do I dare???? Do I have to send in his headshot? Because that dog does not take a bad picture.

Even just this morning, he was waking up from a nap under my sweater and he hadn’t combed his hair or anything and look: 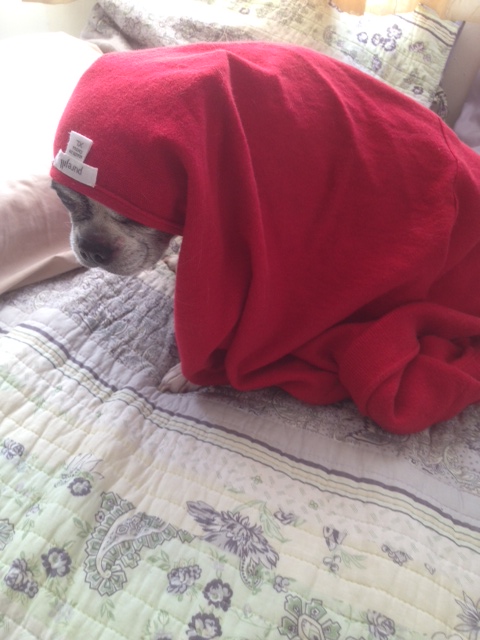 I was talking to my sister Marcia this morning telling her my plan to bring him over to the show and insist he be admitted as a write in.

She reminded me that since Ray is scared to death of other dogs, when he wins, which he surely will, he will be shaking too much for them to put the ribbon on him.

I guess she’s right but winning stuff is in my blood now. I want to win some more but I’m not sure where my skills lie.

I started trying to remember things that I’ve done in the past without giving a thought to how awesome I am and therefore not pushing ahead and bringing it to greatness.

Wait a minute. Here’s something. When I was a caseworker in the South Bronx during the 60’s I once tap danced from the intake section of the Welfare office back to my desk.

At that time I did it just to amuse myself but even though I was warned never to do it again or risk being fired (something that could never happen because during those days a city worker had to be actually caught killing someone to get fired and probably even then you’d just get a good talking to).

But if I knew then what I know now, you know the part about me being awesome, I’d have tap danced my way out of that shit hole and onto Broadway.

Maybe it’s not too late.