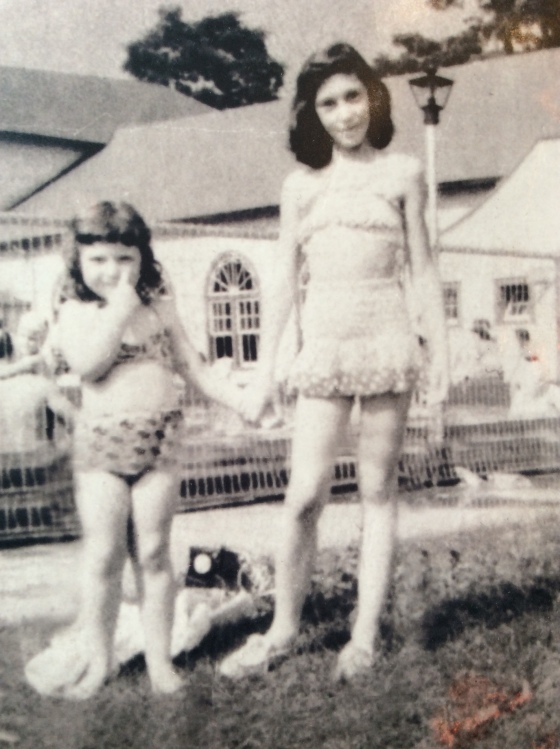 (Me and Marcia. I still have this bathing suit and I look the same in it only I almost never pick my nose any more)

My sister Marcia and I have always been very close so we think the same about most things. My niece Julie once referred to us as judgmental . Although it pissed me off at the time I gotta say there is some truth to it.

I know that when I walk Ray I have a running commentary in my mind.

“So tell me lady. When you tried those pants on in the store did you tell yourself “Nice fit”?”

“I see you made sure that you were wearing a hat this morning but your kid was on his own?”

I know Marcia does the same thing and that’s pretty much what our phone calls are like.

We speak several times a day and we never run out of things to discuss. There are plenty of people in our world that would benefit from our kind and corrective criticisms if only they could hear them.

When we run out of people we know, we can move from them to politicians and general celebrities. In a pinch we can always resort to our favorite subject, bad meals we’ve been served.

We don’t do that frequently because it’s too painful for us. We like food very much and we both have good memories and can hold a grudge for an amazing amount of time.

We got on that subject early in the convo yesterday since Marcia had a birthday and her  kids bought her and her husband a fabulous meal in a fancy restaurant.

Though she loved what she ate and told me about it in detail it only brought to mind a few times when she wasn’t treated so well in the culinary department.

Even though I’ve heard these stories many times I always listen politely since I know she has to get it out.

After taking some time to pin down the date, it was early in 1960, she once again told me about a couple she knew, let’s call them Victor and Minnie, who came to dinner. Marcia was a newlywed and she really fussed since Victor wouldn’t stop raving about what a great cook his wife was.

Marcia served lasagna, shrimp marinara, a lovely salad and a home made cheese cake, which she had to make twice since my mother told her it didn’t have to set so the first one dripped all over her stove.

Didn’t I say she has a great memory?

Vic and Minnie invited them to dinner the next week where they served packaged cheese fondue and a supermarket cake.

The indignity gets Marcia hot under the collar whenever she thinks of it. She didn’t get any calmer when she moved directly into a dinner about 10 years ago where first the hostess served soup.   They waited for the main dish when out came ……dessert.

I could only calm her down by relating my tragic story or what I refer to as “The day of the jelly sandwich”. I’ve told this before on this blog but it can’t be repeated often enough.

The name of this tragedy came from the book “Shogun “.

It seems they boiled this man alive for hours and hours and later referred to it as “The Night of the Screams”.

I was 10 years old. Let’s see that would have to be 1954. My oldest sister Iris and her husband George took me out on their boat for the day, and it was a long day.

Come lunchtime Iris takes out a bag and hands me ….. a jelly sandwich on packaged rye bread. Yes you’re reading correctly. Not peanut butter and jelly or cream cheese and jelly, just jelly.

I know it was a Tuesday because I remember saying to Iris, “You know I always take a hot lunch on Tuesday” This fell on deaf ears.

Hence “The Day of the Jelly Sandwich”. 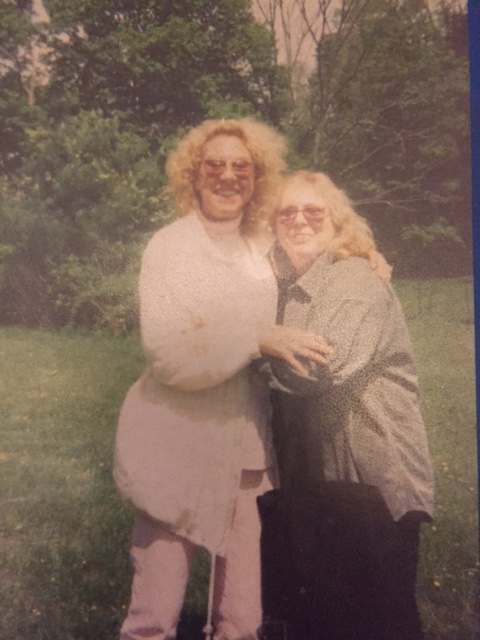 me and Iris in better times.

Just writing this is upsetting to me. I really do want to remember Iris with love so I have to stop now and pull myself together.

I have a “Real Housewives of Atlanta” on my dvd. I believe that there was some hair pulling in the coming attractions.

Maybe that will calm me down.

Or I’ll just give Marcia a call.