Some of you may have noticed that I haven’t written about David in a long time.

When trump became president I could no longer be the exasperated friend  when he’d spout his racial, gender and religious slurs, his hatred for Obama and his love of guns.

Now I know you are saying to yourself “Why would she be friends with him to begin with?”

Let me try to answer that.

Now he isn’t all bad. He doesn’t give a shit who marries who. He would like to keep guns out of the hands of some people and he thought trump was nuts. So nuts in fact that he voted for Hillary.

When David moved to Houston we kept in touch pretty regularly. We’d have a cocktail on the phone several times a week.

That is until the election.

David has made most of his money in oil and coal at least that’s what I think. I never much listened. If it benefited the oil industry I presume he’d poison the water that was given to sick puppies. Again, that’s just what I guess.

Under the comfort of President Obama I could laugh at him and fight with him on these calls and we’d hang up as friends.

The situation is different now. I’m really scared. When David said he was thrilled with shithead’s cabinet I couldn’t just call him an idiot and leave it at that.

I don’t have President Obama to protect me, children, the air, the water, health care, social security, illegal and even legal aliens or my country as I always knew it.

So our phone calls became fewer and shorter because the second he said anything I didn’t like I became the liberal trump. I didn’t try to refute it with logic I just hung up.

Now there is a new wrinkle in our relationship.

David tells me he is dating a woman who’s a liberal.

“How can she stand you?”

“I’m very careful when I speak. Although I did say wetback the other day and she was furious. But I’ve changed”

He sent me a photo: 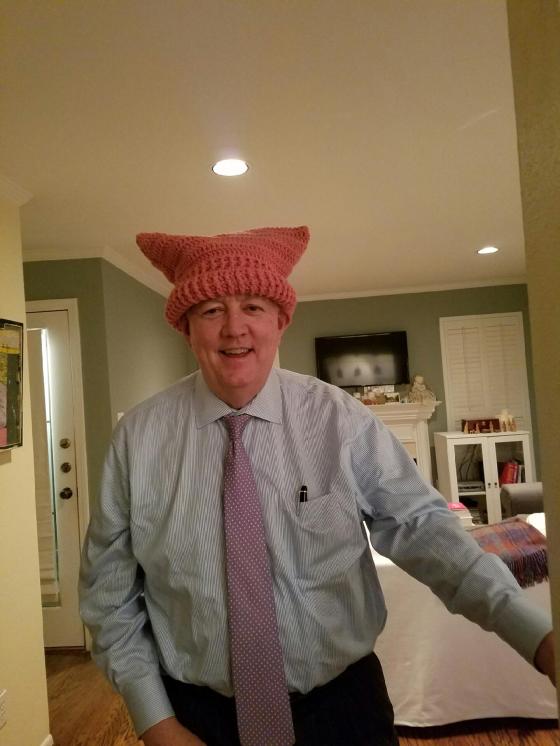 “All I can say is don’t get too attached to her. You think that hat is a Trojan Horse that will get you in her pants but I know you very well and there is no way you can hide who you are and as you know you a terrible person”

David actually sent me 2 photos to, I guess, show me how he’s changed and I put them both in this post. I removed the second one after I looked at  it carefully.

Maybe I’ll put it back in so you can see what offended me in it.